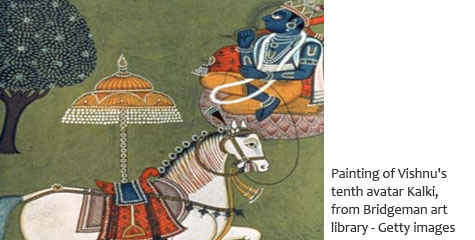 Editor’s Note:  In the divine trinity of Brahma, Vishnu and Shiva, Vishnu is commonly called the Preserver  while Shiva is  the Destroyer. Alternatively Vishnu is the householder, worshipped with sprigs of tulsi, a household plant, while Shiva is the hermit, worshipped with  leaves of bilva, grown outside the house. But in Vishnu’s last avatar, Kalki, he appears to take on the form of  the destroyer as well. However the avatar of Kalki is really about letting go with faith in renewal, writes mythologist Devdutt Pattanaik in his new book 7 Secrets of Vishnu (Westland Ltd.). Here is an excerpt.

Kalki is the tenth and final avatar of Vishnu, visualised as a warrior who rides a white horse and brandishes a flaming sword.

The story of Kalki starts appearing in Hindu scriptures at the time when India was overrun by a whole host of foreign marauders from Central Asia. These were brutal and barbaric tribes such as the Huns and later the Mongols. The story was a clear response to their brutality. These new invaders were destroying the old way of life and it was hoped that Vishnu, as Kalki, would destroy the new ways, and restore life to the old ways. Kalki was probably inspired by messianic thoughts that are prevalent in Judaism, Christianity and Islam. He was the deliverer and the saviour.

Across India, there are many folk heroes who ride a horse and brandish a sword much like Kalki. He is thus almost a guardian god in folk imagination. But in the scriptures, he is the one who will close the Kalpa, the world-cycle, so that a new one can begin.

Even the Buddhists had a similar idea, of a Bodhisattva of the future, Manjushri, who yields a flaming sword. In the Tibetan Buddhist tradition, this wrathful manifestation Manjushri is called Yamantaka. Yamantaka is an epithet associated with Shiva in Hindu tradition and means the destroyer of death. Thus, metaphysically, Kalki will destroy everything, even death. He will destroy all structures so that none exist. In other words, he will herald Pralaya.

Material reality is impermanent. It has to change; in other words, it has to die and be reborn. So everything that has form and name has to eventually wither away and die. In the lore of Vishnu these transformations of Prakriti are not random; they are organised and predictable. They take the form of yugas, or eras.

Vishnu thus acknowledges the end of the world, engages with it, even participates in it. While as Parashurama and Ram and Krishna, he struggles to hold on to dharma, despite the corrupting march of time, as Balarama and finally Kalki, he lets go and allows the world to collapse. This is wisdom, knowing when to act and when to withdraw, knowing when to stop fighting and allowing age to take its toll.

The beginning of the end

The idea of things ending recurs in the three great epics of India: Ramayana, Mahabharata and Bhagavata. In the Ramayana, in the end, Sita returns to the earth whence she came from and Ram walks into the river Sarayu, never to rise up again. In the Mahabharata, in the end, the Pandavas have to renounce their kingdom and walk up the mountains, seeking heaven and ultimately facing death. In the Bhagavata, Krishna leaves the village of cowherds, Vrindavan, and makes his way to the city of Mathura. He leaves on a chariot whose charioteer’s name is Akrura, one who is not cruel. The milkmaids beg Krishna to stay back but Krishna moves on to the next phase of his life, abandoning his parents and friends and lovers. That the charioteer is ‘not-cruel’, is a clear communication that one must never begrudge the march of time. Like Yashoda, who raised Krishna with love and affection only to watch him leave her and go to Mathura, we must all ultimately learn to let go.

Both Kama and Yama are forms of Vishnu, doing their duty, preserving the cycle of rebirths. Kama ignites life. Yama ignites death. Kama ensures death is not permanent; Yama ensures life is not permanent. There are typically no temples dedicated to Kama or Yama but their images are sometimes seen in Vishnu temples. Kama is depicted riding a parrot and holding a sugarcane bow in his hand; Yama rides a buffalo and holds in his hand either a book of accounts or a staff or a noose. Kama arouses the senses, makes Brahma succumb to the power of Maya; Yama ensures that all actions are repaid, thus maintaining the account book of Karma.

The symbols of Kama and Yama are found on the image of Vishnu. Vishnu holds in his hands four symbols: Shankha (conch), Chakra (wheel), Gada (mace) and Padma (lotus). Shanka symbolizes communication; Chakra marks the wheel of time; Gada the demand for discipline; Padma the nectar of joy. Shankha and Padma are water symbols; they affirm life and love and so are associated with Kama. Chakra and Gada are fire symbols; they affirm the rhythm of nature and the rules of culture and so are associated with Yama. Together, Kama and Yama preserve life. Together, Kama and Yama make up Vishnu.

A little known character in Hindu mythology is Vadavagni, a mare which breathes fire and stands on the ocean floor. This submarine mare causes the sea water to evaporate and turn into mist, thus preventing the sea from ever overflowing on to land. It is said that at the time of Pralaya, Vadavagni will stop doing this, causing the ocean to expand and submerge the earth. The fire of the submarine mare will burst forth in the form of volcanoes. Everything will be destroyed by lava and water.

The origin of the fire-breathing mare is interesting. According to one story, Kama, the god of love, once tried to arouse desire in the mind of Shiva. Shiva opened his third eye, released a missile of fire and destroyed the god of desire. But without desire, the world cannot function. Hence, Vishnu caught the fire of Shiva’s third eye, turned it into a mare and hid her under the sea.

The horse is a highly revered animal in Hinduism right from Rig Vedic times even though, strangely, the horse is not a native Indian animal. It does not thrive in the subcontinent except in parts of Gujarat and Rajasthan. Since the horse came into India from the North West frontier, along with traders and marauders, Vishnu’s horse-riding form, Kalki, has been associated with warlords who overran India in medieval times.

Vishnu not only rides a horse. He also becomes a horse. One form of Vishnu with the head of a horse that is highly revered especially in south India is Hayagriva. This form of Vishnu is associated with education. From the horse’s head emerges Saraswati, goddess of knowledge. Vedic mythology is full of tales where wisdom reaches the world through horse-headed beings. The sun, for example, appeared with a horse’s head to reveal the wisdom of the Veda to Rishi Yagnavalkya. Rishi Dadichi replaced his human head with a horse’s so that he could share Vedic wisdom with the Ashwini twins.

A matter of horse sense

What is this Vedic wisdom? Vedic wisdom is realisation that there is more to life than material reality that is perceived through the senses. It is wisdom that liberates us from the limitations of nature. It enables man to break free from Prakriti (material reality) and realize Purusha (spiritual reality). Prakriti makes us mortal and restless, Purusha makes us immortal and serene. The journey from Brahma to brahman, from the finite to the infinite, is the song of Hayagriva.

Hayagriva draws attention to the fact that the notion of property is not an objective reality, but a subjective truth, a cultural construction of human beings, not a natural phenomenon. In other words, they are creations of Maya and components of Brahmanda. If man does not exist, there would be no property to possess. Nature does not need man; man needs nature. It is a delusion of man that it is the master of nature, and the owner of nature’s wealth and information.

When we self-aggrandise ourselves by being territorial and dominating other human beings, Hayagriva reminds us that we are still animals, displaying animal instincts of survival, and that we have not evolved despite a larger human brain. Vedic wisdom is that which enables man to break free from the animal and discover the human. To break free from fear and discover faith. For that, we have to surrender to the idea of spiritual reality, to Purusha, that which exists beyond Prakriti.