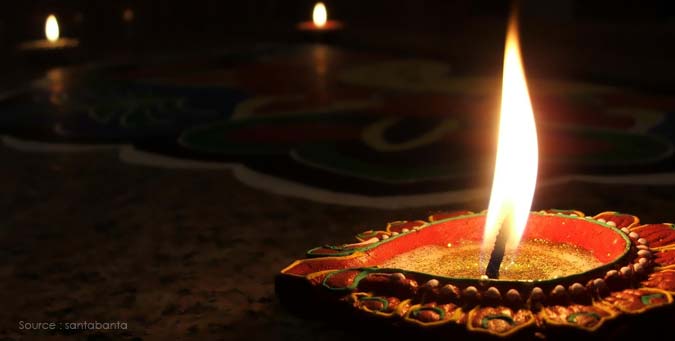 # The First Day of Diwali : Dhanteras

The day before Diwali is celebrated as Chhoti Diwali / Narak Chaturdasi or 'small Diwali'. It is Diwali on a smaller scale, with fewer lights lit and fewer crackers burst. The morning after Choti Diwali, the women of the house make beautiful, colored rangoli in the doorway and courtyard. Tiny footprints made out of rice paste are a special feature of the rangolis made for Diwali. In Hindu homes, Chhoti Diwali celebrations involve a ritual puja to Goddess Lakshmi and also to Rama in the evening. Songs in honor of the god are sung and aarti is performed.

Legends behind Chhoti Diwali : The story goes that the demon king Narakasur ruler of Pragjyotishpur (a province to the South of Nepal) after defeating Lord Indra had snatched away the magnificent earrings of Aditi, the Mother Goddess (the ruler of Suraloka and a relative of Satyabhama, Lord Krishna's wife) and imprisoned sixteen thousand daughters of the gods and saints in his harem.

On coming to know about this, Satyabhama was enraged by Narakasura's malevolence towards women, and she appealed to Krishna to give her the golden chance to destroy Narakasura. The legend also says that Narakasura was given a curse that he would be killed by a woman. Krishna granted Satyabhama a boon to fight with Narakasura. With Krishna as the charioteer, Satyabhama entered the battle field. During the war, Krishna swooned for a while, a preordained divinely act adopted to empower Satyabhama to kill the demon. After Narakasura was beheaded, the imprisoned women were released, and Krishna accepted to marry them.

So on the day previous to Narakachaturdashi, Lord Krishna's divine intervention led to the killing of the demon, Narakasura and liberation of the imprisoned damsels as well as recovery of the precious earrings of Aditi. As a symbol of that victory Lord Krishna smeared his forehead with the demon king's blood. Krishna returned home in the very early morning of the Narakachaturdashi day. The womenfolk massaged scented oil to his body and gave him a good bath to wash away the filth from his body. Since then the custom of taking bath before sunrise on this day has become a traditional practice specially in Maharashtra.

It is interesting to note that Bhudevi, mother of the slain Narakasura, declared that his death should not be a day of mourning but an occasion to celebrate and rejoice. Since then, Deepavali is being celebrated by people every year with joyous celebrations with lot of fun and frolic, and fire works.

In South India that victory of the divine over the mundane is celebrated in a very peculiar way. People wake up before sunrise prepare a paste by mixing Kumkum in oil, symbolizing blood and after breaking a bitter fruit that represents the head of the demon King that was smashed by Krishna, apply that mixture on their foreheads. Then they have an oil bath using sandalwood paste.

In Maharashtra also, traditional early baths with oil and "Uptan" (paste) of gram flour and fragrant powders are a `must'. All through the ritual of baths, deafening sounds of crackers and fireworks are there in order that the children enjoy bathing. Afterward steamed vermicelli with milk and sugar or puffed rice with curd is served.