From Akbar to Indian Independence : Ayodhya - a journey through time 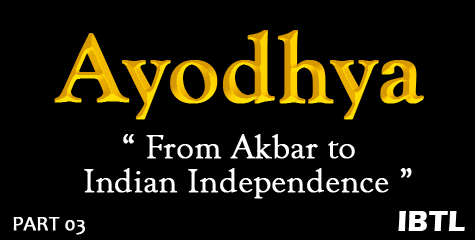 Continued from From Ram to Babur : Ayodhya - a journey through time, Akbar succeeded Humayun and turned his kingdom into an empire. During his rule there are said to have been twenty outbreaks when Hindus fought relentlessly to regain the control of the janmsthaan site. Akbar granted permission to the Hindus in recognition of their rights to construct a platform right outside the mosque and perform pooja there. The platform today is known as the Ram chabootara. Akbar also introduced a silver coin by the name of Ramtaka with the images of Ram and Seeta on either side of it. One of the courtiers of Akbar presented Akbar with a Ramayan in a pictorial form. Abul Fazal, the author of Akbarnaama and Aayine-Akbari categorically associates Awadh with the residential place of Ram and one of the holiest places of the antiquity.

Meanwhile, during Jahangeer’s rule, Wiliam Finch visited Ayodhya somewhere between 1608 and 1611. Wiliam Finch was a traveller who has confirmed the existence of the ruins of Ramkot, in his report which has been quoted and reproduced by Wiliam Foster in his book “Early Travels in India”. After 1658, Aurangzeb’s lieutenant Jaanbaaz Khan attacked Ayodhya but was defeated. Guru Govind Singh’s Akaalis fought against his army near Ayodhya at Rudali and Sadatganj. In 1664, Aurangzeb himself went to Ayodhya and killed ten thousand Hindus, and demolished the Ram Chabootara. But even thereafter, the Ram Navmi celebrations continued. There were fights between Nawaab Salamat Khan and Raja Gurdutt Singh of Amethi and Rajkumar Singh of Pimpra. Saadik Ali also had to face five attempts made by Hindus to recapture the janmsthaan site.

In 1751, the second nawaab of Awadh Safdarjung invited Malhar Rao Holkar, the eminent courtier of the Marathas to fight against the pathans. Malhar Rao Holkar put a condition that in return Safdarjung would hand over the three holy cities of Ayodhya, Kaashi and Prayaag to the Hindus. Again in 1756, Shujauddaula asked for Maratha help when the Afghans invaded Delhi. The maratha agent in his court demanded the transfer of the three holy citiies. Shujauddaula agreed to it. Unfortunately, the marathas lost the bloodiest war at Panipat and the fate of Ayodhya remained in the dark, for another century.

Numerous muslim and European writers during the century confirm that a mosque had been built by Meer Baanki at Babur’s orders after demolishing the temple at Ramkot. They also confirm the tradition of Ram worship at the janmsthaan site. They also confirm the existence of the practice of celebrating Ram Navami with great gathering of people from all over India. Let us have a look at some of these books and their authors.

In this relatively peaceful period, there were repeated attempts to recapture the janmsthaan. Five such attempts were made by Baba Uddhav Das, Baba Ramcharan Das during Nasiruddin Haidar and Wazid Ali Shah’s rule. In 1857, one Amir Ali declared a Jihad and attacked the site of Hanuman Garhi with a 170 men. However, they were defeated and the jihad wiped out. Then came the Indian war of Independence of 1857 when the Muslims collaborated with Hindus to re-establish the Moughal king Bahadur Shah Jafar as the emperor of India and fought against British Imperialists. This time, another Amer Ali, a maulawi and the leader of the rebels of Awadh convinced the native muslims and decided to handover the Janmsthaan site to Hindus. However, the British imperialists using their tactics arrested Amer Ali and Baba Ramcharan Das and hanged both of them by a Tamarind tree which still stands in Ayodhya as a mute witness to the event.

In the Encyclopedia of India by the then Surjeant General, Edward Balphar, it is mentioned that there were three mosques on the site of the temples. These were the janmsthaan, the Swarg Dwaar and the Treta ka Thakur. We have seen earlier some books and authors. Apart from these, there are other sources of reference which are also worth looking at. Let’s have a look at them. These are

The Court verdict of 1886 by Colonel, F E H Meher in Mohammad Asgar’s petition in which he states after a visit to the site, “It is most unfortunate that a masjid was built on a land especially held sacred by Hindus, but as that event occurred about 356 years ago, that is in 1530, it is not possible to remedy to grievance. All that can be done is to maintain the party in status quo.”

In 1934, Hindu Muslim clashes broke out in Ayodhya at the issue of a cow being slaughtered at Ayodhya. The structure too was severely damaged. After the clashes, the Muslims of Ayodhya abandoned the mosque and discontinued offering Namaz in it forever.

to be continued ... " Ramlala’s advent to brutal killing of Karsewaks "