Swamy called a spade a spade, a response to Dr. Swamy's Op-ed 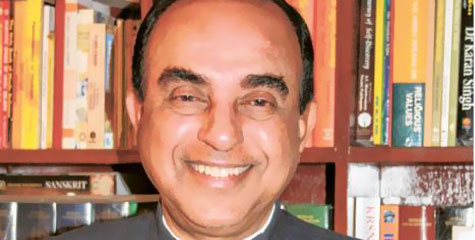 The article penned by Dr.Subrahmaniam Swamy which was published by DNA on July 16 got the publicity it deserves, thanks to secular left wing friends in Harvard and all over the world. In the article Swamy raised many important points in combating terror. There were people who respected his right to opinion, while they humbly disagreed with some or many of his ideas. Here we are, who also belong to the so called “Youngistan”, humbly AGREE to each word that Swamy wrote in the article! This post is an attempt to counter the allegations made by the left wing student orgs against Dr. Swamy.

● “Declare India a Hindu Rashtra in which non-Hindus can vote only if they proudly acknowledge that their ancestors were Hindus”
● “Remove the masjid in Kashi Vishwanath temple and the 300 masjids at other temple sites”
● “enact a national law prohibiting conversion from Hinduism to any other religion”
● “Propagate the development of a Hindu mindset.”
● “Muslims of India, are being programmed by a slow reactive process to become radical and thus slide into suicide against Hindus.”

1. First of all, let us be clear about how Swamy defines a Hindu: “India that is Bharat that is Hindustan is a nation of Hindus and others whose ancestors were Hindu. If any Muslim acknowledges his or her Hindu legacy, then we Hindus can accept him or her as a part of the Brihad Hindu Samaj (greater Hindu society)” . Swamy defines HINDU in a larger context, being a Hindu is not like being a Muslim or a Christian, but like the English, The Americans, and the Chinese. Hindutva does not treat Hindu –as an “ism”, but as a nationality ! So any one regardless of his faith and mode of worship can be a Hindu, and the nation of Hindus will be called Hindustan or HinduRashtra in Sanskrit. Before the Islamists and the missionaries came to Bharath India was a land of Hindus, still remain so, although we reduced to less than 80percent. So every Muslim, Christian, Jew of India has a Hindu ancestry. And if they deny the Hindu ancestry, it is like claiming themselves outsiders. So The first point Swamy made is not something outrageous, but it is a fact that those who cannot identify their roots with this country do not have the right to indulge in the politics of this nation.

2. Kashi Vishwanath temple, Ayodhya Ram Mandir, and Mathura Shri Krishna temple are few of many temples which was demolished(some partially) by Islamists during their reign. The “Great” Akbar had also demolished many temples although the students of India have been taught only his fictional greatness. Every nation when it gets Freedom removes the symbols of the colonial past and reconstruct the places which was demolished by the oppressors. The temple in Somnath is an example; where in India under the leadership of Sardar Patel replaced the mosque with the temple. The case of Ayodhya is still pending in Supreme Court, and it is important to note the last year judgment by the High court which endorsed the nationalist view point. The article in crimson however says “Swamy recommended demolishing hundreds of mosques” clearly misleading. Swamy used the word “Remove” not “Demolish” which has different meanings. (Karsevaks Demolished Babri Masjid, Sardar Patel Remove the masjid of Somnath and built temple).

3. Dr Swamy is not the first person who asked for the ban on Conversions, let me remind those secular jokers, that there is one man who is called the Father of the nation, MAHATMA GANDHI who advocated the same. He had said “If I had power and could legislate, the first thing I would ban is conversions“. So the likes of Pinto (who leads the petition tamasha at Harvard) who says “”Not allowing Hindus to convert to any other religion-it’s honestly kind of absurd” may very well call our father of nation also absurd ! Gandhi also has explained why it is necessary to ban the conversions from his personal experience. He writes in his auto bio..  “Only Christianity was at that time an exception. I developed a sort of dislike for it. And for a reason. In those days Christian missionaries used to stand in a corner near the high school and hold forth, pouring abuse on Hindus and their gods. I could not endure this. I must have stood there to hear them once only, but that was enough to dissuade me from repeating the experiment. About the same time, I heard of a well-known Hindu having been converted to Christianity. It was the talk of the town that, when he was baptized, he had to eat beef and drink liquor, that he also had to change his clothes, and that thenceforth he began to go about in European costume including a hat. These things got on my nerves. Surely, thought I, a religion that compelled one to eat beef, drink liquor, and change one’s own clothes did not deserve the name. I also heard that the new convert had already begun abusing the religion of his ancestors, their customs and their country. All these things created in me a dislike for Christianity.”

4. Islamists have the right to kill kafirs, the missionaries can convert, But a Hindu should not propagate a Hindu mindset in a country where they are an overwhelming majority; this seems to be the secular logic.

5. Many of the convicted terrorists in India are Muslims, many Muslims undergo training in Pakistan and Kashmiri camps to act against nations, is it not enough proof to say that
Muslims of India, are being programmed by a slow reactive process to become radical and thus slide into suicide against Hindus. ( Eg: chargesheet-terror-trail-kannur).Instead of preventing the whole muslim community to be programmed by the jihadists cross the border, the seculars are turning a blind eye and thus encouraging the programmers. The petition reads “Swamy’s comments cast doubt on his ability to treat a diverse community of students with fairness and respect.” , the petitioner must know that Swamy ‘son in law is a Muslim !

So to conclude with we cannot understand what is so much outrageous in Swamy article other than his calling a spade a spade.