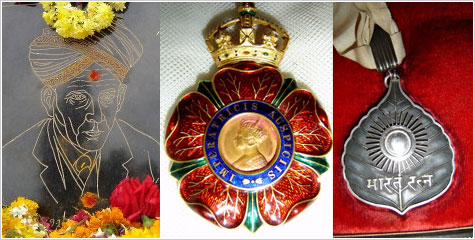 Bharat Ratna Sir Mokshagundam Visvesvaraya, KCIE was a notable Indian engineer, scholar, statesman and the Diwan of Mysore during 1912 to 1919. He was a recipient of the Indian Republic's highest honour, the Bharat Ratna, in 1955. He was knighted as a Commander of the Indian Empire by King George V for his myriad contributions to the public good. Every year, 15 September is celebrated as Engineer's Day in India in his memory. He is held in high regard as the first and pre-eminent engineer of India. He was the chief designer of the flood protection system for the city of Hyderabad.

Early years : Visvesvaraya was born to Srinivasa Sastry and Venkachamma in Muddenahalli village, 40 miles from Bangalore, India. His family was a Smartha Brahmin family of the Vaidiki Mulukanadu sub-caste. In fact his ancestors actually belonged to Mokshagundam village, near Giddalur in the Prakasam district of present-day Andhra Pradesh, and had migrated to Mysore some three centuries ago. The family name “Mokshagundam”, preserves the memory of his association with Andhra Pradesh. His father was a Sanskrit scholar and an authority on Hindu Dharmashastras (theology), besides being an Ayurvedic practitioner. Visvesvaraya lost his father at the age of 15. The family was in Kurnool when this happened, and moved back to Muddenahalli there after. Sir M.V. attended primary school in Chikballapur and high school in Bangalore. He earned his B.A. from Madras University in 1881 and later studied civil engineering at the College of Science, Pune.

Career as Engineer : Upon graduating as an engineer, Visvesvaraya took up a job with the Public Works Department (PWD) of Bombay (now known as Mumbai) and was later invited to join the Indian Irrigation Commission. He implemented an extremely intricate system of irrigation in the Deccan area. He also designed and patented a system of automatic weir water floodgates that were first installed in 1903 at the Khadakvasla Reservoir near Pune. These gates were employed to raise the flood supply level of storage in the reservoir to the highest level likely to be attained by a flood without causing any damage to the dam. Based on the success of these gates, the same system was installed at the Tigra Dam in Gwalior and the Krishnaraja Sagara (KRS) Dam in Mandya/ Mysore,Karnataka. In 1906-07, Government of India sent him to Eden,(Africa) to study water supply and drainage system and the project prepared by him was implemented in Eden successfully.

Visvesvaraya achieved celebrity status when he designed a flood protection system for the city of Hyderabad. He was instrumental in developing a system to protect Visakhapatnam port from sea erosion

Visvesvaraya supervised the construction of the KRS Dam across the Cauvery River from concept to inauguration. This dam created the biggest reservoir in Asia when it was built. He was rightly called the "Father of modern Mysore state" (now Karnataka): During his period of service with the Government of Mysore state, he was responsible for the founding of, (under the Patronage of Mysore Government), the Mysore Soap Factory, the Parasitoide Laboratory, the Mysore Iron & Steel Works (now known as Visvesvaraya Iron and Steel Limited) in Bhadravathi, the Sri Jayachamarajendra Polytechnic Institute, the Bangalore Agricultural University, the State Bank of Mysore, The Century Club, Mysore Chambers of Commerce and numerous other industrial ventures. He encouraged private investment in industry during his tenure as Diwan of Mysore. He was instrumental in charting out the plan for road construction between Tirumala and Tirupati. He was known for sincerity, time management and dedication to a cause.

Diwan of Mysore : After opting for voluntary retirement in 1908, he took a foreign tour to study industrialised nations and after, for a short period he worked for the Nizam of Hyderabad. He suggested flood relief measures for Hyderabad town, which was under constant threat of floods by Moosi river. Later, during November 1909, Visvesvaraya was appointed as Chief Engineer of Mysore State. Further, during the year, 1912, he was appointed as Diwan (First Minister) of the princely state of Mysore. He was Diwan for 7 years.

With the support of Krishnaraja Wodeyar IV, Maharaja of Mysore, Visvesvaraya made an arguably unprecedented contribution as Diwan to the all-round development of the state. Not only the achievements listed above, but many other industries and public works owe their inception or active nurturing to him. He was instrumental in the founding of the Government Engineering College at Bangalore in 1917, one of the first engineering institutes in India. This institution was later named the University Visvesvaraya College of Engineering after its founder. It remains one of the very most reputed institutes of engineering in Karnataka. He also commissioned several new railway lines in Mysore states. Visvesvaraya was Sir Mirza Ismail's mentor and in 1926 by way of recommendation to the King who supplemented Mirza Ismail by elevating him to the coveted position of the [[List of Diwans of Mysore.

Sir M.V. was honoured with honorary membership of the international Institution of Civil Engineers (based in London) and a fellowship of the Indian Institute of Science (based in Bangalore). He was awarded several honorary doctoral degrees like D.Sc., LL.D., D.Litt. from eight universities in India. He was president of the 1923 Session of the Indian Science Congress. Sir M.V. was awarded honorary Membership of London Institution of Civil Engineers for an unbroken 50 years.

Every year September 15 is celebrated as World Engineers Day worldwide in honor of the great technocrat and visionary.

The family temple at Muddenahalli : Sir M. V.'s mother, Venkatalakshamma discovered the stone sculpture near her house and figure of Hanuman was caraved on it and same is worshipped at Muddenahalli.

Memorial at Muddenahalli : There is a beautiful and very picturesque memorial of Sir M. V. located on the family-owned land at Muddenahalli, with the Nandi Hills as a backdrop.

Developments in Muddenahalli : In honor of Sir Visvesvarayya, a number of educational institutions are being constructed in the Muddenahalli-Kanivenarayanapura region. Among these is the Sathya Sai Baba University and School of Medicine  the elite Indian Institute of Technology Muddenahalli, as well as the 600 crore Visvesvaraya Institute of Advanced Technology.[10][11] These developments will make the historical town of Muddenahalli the premier education hub in northern Bangalore.