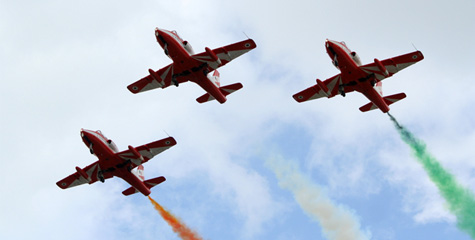 The Indian Air Force is the air arm of the Indian armed forces. Its primary responsibility is to secure Indian airspace and to conduct aerial warfare during a conflict. It was officially established on 8 October 1932 as an auxiliary air force of the Indian Empire and the prefix Royal was added in 1945 in recognition of its services during World War II. After India achieved independence from the United Kingdom in 1947, the Royal Indian Air Force served the Dominion of India, with the prefix being dropped when India became a republic in 1950.

Since independence, the IAF has been involved in four wars with neighbouring Pakistan and one with the People's Republic of China. Other major operations undertaken by the IAF include Operation Vijay - the invasion of Goa, Operation Meghdoot, Operation Cactus and Operation Poomalai. Apart from conflicts, the IAF has been an active participant in United Nations peacekeeping missions.

The President of India serves as the Commander-in-Chief of the IAF. The Chief of Air Staff, an Air Chief Marshal (ACM), is a four-star commander and commands the Air Force. There is never more than one serving ACM at any given time in the IAF. One officer Arjan Singh, DFC has been conferred the rank of Marshal of the Air Force, a five-star rank and the officer serves as the ceremonial chief.

With a strength of approximately 170,000 personnel and 1,400+ aircraft.The Indian Air Force comprises one of the worlds largest air forces. In recent years, the IAF has undertaken an ambitious expansion and modernisation program to replace its aging Soviet-era fighter jets.

The IAF's mission is defined by the Armed Forces Act of 1947, Constitution of India and the Air Force Act of 1950, in the aerial battlespace, as:

“ Defence of India and every part thereof including preparation for defence and all such acts as may be conducive in times of war to its prosecution and after its termination to effective demobilisation. ”

Thus, the IAF has the primary objective of safeguarding Indian territory and national interests from all threats in conjunction with the other branches of the armed forces by defending Indian airspace. The IAF provides close air support to the Indian Army troops in the battlefield and also provides strategic and tactical airlift capabilities. The IAF also operates the Integrated Space Cell together with the other two branches of the Indian Armed Forces, the civilian Department of Space and the Indian Space Research Organization (ISRO) to utilize more effectively the country's space-based assets for military purposes and to look into threats to these assets.

The Indian Air Force along with the other branches of the Indian Armed Forces provide assistance in disaster relief such as during natural calamities by undertaking evacuation or search-and-rescue (SAR) operations and air dropping relief supplies in affected areas. The IAF provided extensive assistance to relief operations during natural calamities such as the Gujarat cyclone in 1998 and the Tsunami in 2004. The IAF also provides assistance to other countries during relief activities such as Operation Rainbow in Sri Lanka.