Europeans and Indians as descendants from a common milk-drinking ancestor within the last 7,500 years. 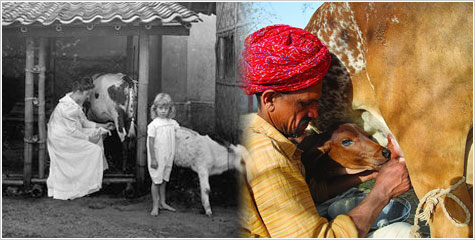 Discovery has reported a shared genetic signature marks that many Europeans and Indians are descendants from a common milk-drinking ancestor within the last 7,500 years. The majority of Europeans and Indians who can drink milk share the mutation known as -13910T. Toomas Kivisild of Cambridge University, senior author of the study, said in a press release that  the -13910T mutation was also common in India – especially in those populations with a tradition of milk drinking.  He also added that but by looking at nearby genetic regions it can be shown that the Indian -13910T has the same origin as that found in Europeans. The mutation was only found in certain segments of the Indian population. People with no history of pastoralism didn't have the -13919T mutation.

“Genetic data doesn’t support some sort of large migration of people from Europe to India in the last 10,000 years. What’s more likely is that just a few migrants carried this mutation to India, and then it spread quickly,” said co-author Mark Thomas of University College London.

All human babies can drink milk because they produce an enzyme called lactase, which breaks down milk sugar or lactose. But only about a third of the world's adults can drink milk without suffering abdominal pain, and other symptoms of lactose intolerance. The genetic mutation that allows adults to drink milk, called lactase persistence, seems to have evolved separately in Europe, Africa, and the Middle East. But until now, the source of lactase persistence in India, the world's largest drinker and producer of milk, was a mystery.