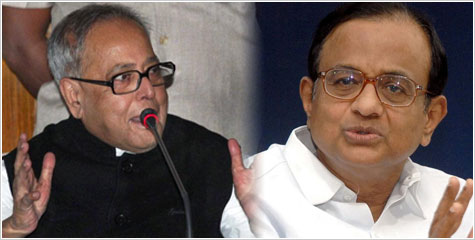 It is an old conflict between two individuals, one who worked long years to become close to the Nehru-Gandhi Dynasty but never succeeded in the manner that a younger politician did with relatively less labour. Both are different, in that one is older, a local from West Bengal and the other from Harvard (he never lets anyone forget that) and Tamil Nadu. And yet they fancy the same space in government, with Finance being the turf over which the two have never ceased battling, as both regard themselves as the ultimate economists capable of controlling India’s financial resources and direction.

The war between UPA's two senior leaders, Finance Minister Pranab Mukherjee and Home Affairs Minister P Chidambaram had been simmering for quite a while, before bursting out into the open a few months ago. It is no secret in the Congress circles that the two often disagreed at Cabinet and core committee meetings, and were barely civil to each other for days after. Even so the differences were papered over, and in public the two shook hands and smiled as long as it took to give the semblance of a united Cabinet. Even so, in their famous off-the-record sessions with select journalists who are well known in the media circles, the two often gave vent to not so subtle criticism of each other. A smile here, a refusal to comment, a dismissive shrug of the shoulders were all gestures calculated to let scribes know that the relationship between Mukherjee and Chidambaram was not exactly calm.

The feud really came out into the open when Pranab Mukherjee bypassed Chidambaram to write directly to Prime Minister Manmohan Singh claiming that his office in North Block had been bugged. And that without informing anyone in the government betraying a complete lack of trust in his colleagues the Finance Minister had hired a private agency handled by former top officials of the intelligence agencies, to comb his office. At the time the Home Minister had to officially say that he would order a probe by the Intelligence Bureau, a response that Mukherjee ignored. After the story hit the media, and became the focus of television chatter, Mukherjee retreated maintaining that the investigation had yielded nothing. At the time, however, clearly planted stories appeared in sections of the media maintaining that at least eight bugs had been found in the Finance Minister's office during the combing operations. This was not denied, and sources now insist that after the "truth" was known, the Finance Minister agreed to close the matter happy that the Home Minister had finally eaten dust.

During this period a Delhi newspaper carried a story of the "Importance of Being Omita Paul" who is currently advisor to Mukherjee in the ministry. It is a well known fact that Paul has been accompanying Pranab Mukherjee over 30 years, serving as his Officer on Special Duty or Advisor in the various ministries he has headed. Mukherjee's camp attributed this story to "leaks" from the Home Ministry and the feud sharpened as the days proceeded.

The genesis of this rivalry lies somewhere in the past. Pranab Mukherjee was fairly close to then Prime Minister Indira Gandhi, although never really in the inner circle. However, his astuteness as a politician was recognised by her and he was brought in as a deputy minister in 1973, and re-elected several times to the Rajya Sabha. After she came back to power, Mukherjee became her Finance Minister between 1982-84 and it is useful to note that at this time Dr Manmohan Singh was the Reserve Bank Governor under him. Singh’s is also a success story that has never ceased to rankle, as Mukherjee found himself being equaled and overtaken by Chidambaram and Manmohan Singh in the party hierarchy.

More so, as his one mistake of declaring his Prime Ministerial ambitions after the death of Indira Gandhi has continued to hound him. Mukherjee was virtually shunned out of the Congress party and went on to form his highly unsuccessful Rashtriya Samajwadi Congress. It was at this time that Chidambaram entered Congress national politics and was brought by Rajiv Gandhi into the Council of Ministers as the Deputy Minister of Commerce. He went on to become Minister of State for Internal Security in the same government holding the post in 1989, just when Mukherjee came back into the party after making peace with Rajiv Gandhi.

Interestingly, Mukherjee flourished during Narasimha Rao’s Prime Ministership going on to become the Minister of External Affairs. Chidambaram, on the other hand, left to join the Tamil Manila Congress, a successful enterprise unlike Mukherjee’s party, and became the Finance Minister of an Opposition government in Delhi.

The two Ministers are also completely different personalities. Mukherjee is home grown, Chidambaram continues with a Harvard Business School hangover. Mukherjee’s English almost requires interpreters when he is abroad, Chidambaram has perfected the clipped accent. Mukherjee, however, is far more popular in the party with Chidambaram always being seen by the Congress workers, even in his home state as alien. This is perhaps the one reason why Mukherjee still remains indispensable to the Nehru-Gandhi family as he can handle Congressmen better than both Singh and Chidambaram, or for that matter others in the party. But the grapevine still places the Home Minister higher in Congress president Sonia Gandhi’s list of favourites, with Mukherjee’s access directly dependent on his current utility.

The deputy director’s letter apportioning part of the 2G scam blame on Chidambaram when he was the Finance Minister is part of this ongoing, all out war. The note was clearly driven by Mukherjee and represented a considered view of the Ministry. Prime Minister Singh brokered some sort of a truce after meeting Mukherjee in New York, and Congress President Sonia Gandhi by meeting the two warring ministers gave her blessings it seems. But clearly the story is far from over as the rot has gone too deep for this little show of unity to last for long.

The two Ministers are daggers drawn, and it will not be long before they shed some blood again. Both are adept at playing the media, with specific reporters/editors being called for the proverbial “plant’ even as others are prepared to deny the plant. The bitterness is on display, and will no doubt erupt again. The only question Congressmen are asking is, “When?”

(Disclaimer: The views expressed in the article are that of the author and does not necessarily represent the editorial policy of IBTL.)