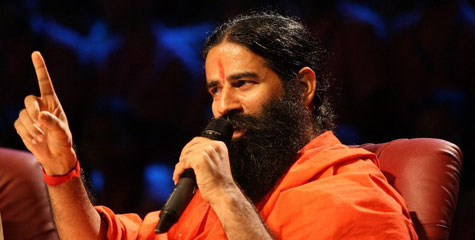 Every morning these days after visiting a nearby temple, I come back at about six thirty , and switch on the Television and browse through the channels. Most of the Hindi channels show “How Jesus can save you” and also a few local channels, also are keen “saving people by bringing jesus” to their life. Quite irritated with all these stuffs of foreign religion, getting played in a national channel, I switch to other channels for some swadeshi stuff. Most of the times the browsing culminates with Astha TV and I gets struck there.

What stops me at ASTHA TV at six thirty in the morning ? Answer is obvious “Baba Ramdev”. For those who have not seen his program, and also for those who do not like to see him, I would explain. The Program always starts with various prarthana shlokahs and chanting of “Vande Mataram” and “Bharatmata Ki Jai”. Then Baba Ramdev does many Pranayama and Yogasanas which the public are also expected to do along with him. Most of the people assembled are daily practitioners of yoga and they do it along with him. Almost after every set of Asanas, Baba Ramdev shouts “Vande Mataram” and the people also echo it. Then he takes questions from the audience, some ask about the health, and some say their illness was healed after doing yoga, some ask about how to serve nation, and some ask about Black money. I was quite impressed last day when a few kids asked about Black money. It shows how deep Baba Ramdev has gone into the minds of people.

Won’t you be surprised to know that Baba does not do this Yog camp once in a while, but almost every day at different places in front of different set of people. That talks about the dynamic personality of the YOG purush . Wherever he goes, he steals the mind of audience. He says”Clap your hands and sing”, the crowds do it, He says “Khade ho jao”, they stand, whatever he say, people do. The crowds, how large they may be, are disciplined, they do not shout unnecessarily, and unlike many other political crowds, they have come to listen to the master, not to fight with each other. If you want to see similar discipline , nationalism and patriotism , then the only other place you can find is Sangh Shakas. I have been to Sangh Shakas, and their programs, except for the uniform, I can not see any difference between Shakas and Baba Ramdev Yog camps. I will take the liberty of saying Baba Ramdev is organizing a Shaka in a more friendly way. There are many similarities between what happens in a Yog camp and in sangh shakas, both frequently shout patriotic slogans, both sing nationalist songs, discuss national issues and does character building.

Many few know, thanks to censoring by national media, it was Baba Ramdev’s crowds which gave anna and his team the first national audience. Just Google “February 27 Ramleela maidan”. Baba Ramdev on that day had organized a mass rally against corruption, in which thousands had participated. Media which censored this mass event in the capital, later ridiculed him by accusing of Hijacking Anna’s protest. I was quite hurt when media started this misinformation campaign, because I know who hijacked whose cause. I was very sad to hear the news of Baba and his followers getting attacked at midnight on 4th June. I was disappointed when the misinformed lot accused Baba of some fake charges which was propagated by congress people. Most of the critics of Baba sounded funny, they seem to argue “Sanyasi should not keep money”, “He himself has blackmoney” , “He is communal”. The media stars even defined the meaning of Sanyas. Let us sympathise with their poor knowledge about sanyas and the sanyasi characters of Hindu itihasas like Vasishta, Vishwamitra and all. Baba Ramdev do not use any money for himself, he do not wear even shirt and pants, do not have any TITAN watch, only thing he does with the money is travel from one place to other.

Baba Ramdev, if you are aware or not, is mobilizing the public, more than any political party, he is inspiring them. He do not ask for anything, but people do anything for him. He makes more and more people patriotic, even muslims at his camps sing “Vande Mataram”. So let us respect him for his leadership qualities, if not more. He has real potential to be one of the leaders who can lead India to what he himself say “Arthik aur Adhyatmic Mahashakthi”.