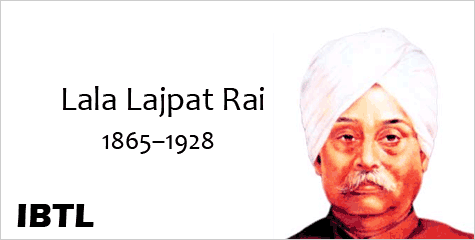 Lala Lajpat Rai, popularly known as Punjab Kesari, was one of the foremost leaders who fought against British rule in India. He was born on January 28, 1865 in village Dhudike, in present day Moga district of Punjab. He was the eldest son of Munshi Radha Kishan Azad and Gulab Devi. He joined the Government College at Lahore in 1880 to study Law where he came in contact with patriots and future freedom fighters like Lala Hans Raj and Pandit Guru Dutt. The three joined the Arya Samaj founded by Swami Daya Nand Saraswati. He passed his Vakilship Examination in Second Division from Government College in 1885 and started his legal practice in Hissar. Besides practicing, Lalaji collected funds for the Daya Nand College, attended Arya Samaj functions and participated in Congress activities. He was elected to the Hissar municipality as a member and later as secretary. He shifted to Lahore in 1892.

Lala Lajpat Rai was one of the three most prominent Hindu Nationalist members of the Indian National Congress. He was part of the Lal-Bal-Pal trio; the other two being Bal Gangadhar Tilak and Bipin Chandra Pal. Lalaji actively participated in the struggle against partition of Bengal. Along with Surendra Nath Banerjee, Bipin Chandra Pal and Aurorbindo Ghosh, he galvanized Bengal and the nation in a vigorous campaign of Swadeshi. Lalaji was arrested on for creating "turmoil" in Rawalpindi and was put in Mandalay jail for six months. Lalaji believed that it was important for the national cause to make a popular opinion in foreign countries to explain India's position. He left for Britain in April 1914 for this purpose. At this time First World War broke out and he was unable to return to India. He went to USA to galvanize support for India where he founded the Indian Home League Society of America and wrote a book called "Young India". The book severely indicted British rule in India and was banned in Britain and India even before it was published. He was able to return to India in 1920 after the end of World War.

After his return, Lala Lajpat Rai led the Punjab protests against the Jalianwala Bagh Massacre and the Non-Cooperation Movement. He was arrested several times. He disagreed with Gandhiji's suspension of Non-Cooperation movement due to the Chauri-Chaura incident, and formed the Congress Independence Party, with a Hindu ideology. In 1928, British Government decided to send Simon Commission to India to discuss constitutional reforms. The Commission had no Indian member. This greatly angered Indians. In 1929, when the Commisssion came to India there were protests all over India. Lala Lajpat Rai himself led one such procession against Simon Commission. While the procession was peaceful, British Government brutally lathicharged the procession. Lala Lajpat Rai received severe head injuries and died on November 17, 1928.

His words, "Every blow made upon me will act like a nail in the coffin of the British empire" proved Prophetic, as British officer Saunders was murdered soon after and following a chain of events, Bhagat Singh, Sukhdev, Rajguru were hanged till death. Their martyrdom galvanized the nation and the British rule didn't last even for 2 decades.