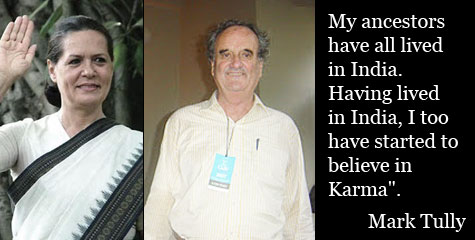 Former BBC Chief Mark Tully has criticized the dynasty politics of UPA chairperson Sonia Gandhi. He made his remarks at the launch of his book Non-Stop India in Delhi. In a query made by Karan Thapar asking if he thought "Sonia Gandhi is a problem" for governance, he responded with "Too much of influence lies there, when it should lie in the Prime Minister's Office". He also said, "The Prime Minster, for all his qualities, is not a politician. At the Centre, most people are not grassrootlevel politicians such as Mulayam. This is a problem with the Congress party." Mark Tully said that Rahul Gandhi is trying to connect with masses but that's not easy.

Mark Tully expressed candidly that India needed to worry more about dynasty politics. In his book, Mark reflects the change in the international view of India - as an emerging economic powerhouse brimming with confidence. The book contains several revealing interviews with the industrialists, politicians, spiritual leaders etc. Tully warned India against laying too much emphasis on corruption lest they forget the cause.

Mark Tully expressed his dipleasure at growing stature of English as the language of the educated middle class saying that its impact on regional languages in a problem. "English is a mark of India, not Bharat," he remarked. On being asked about the reason behind his fascination for India, Tully said, "My ancestors have all lived in India. Having lived in India, I too have started to believe in Karma".