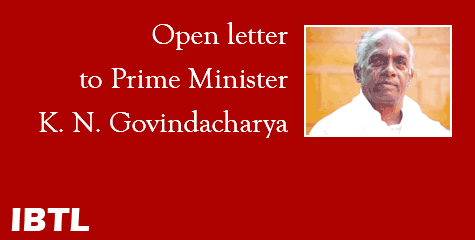 Dear Sir,
The media reported recently that the Union Government is planning to pump Rs.23,000 Crores to bail out Air India from the slump that it has got into for no reason other than its corrupt practices and extravagance. We are hereby lodging our protest against the move. This step of yours betrays your government’s misplaced priorities in “development”, a term that your dispensation is hard pressed to properly interpret and realise. The people of this country would like to know about the feasibility of your continuous efforts to rescue the state-owned air carrier, which have never really shown signs of recovery. We demand herewith a white paper on the issue.

While the exchequer is splurging on Air India, it is ironical to note that the Union Government never paid any heed to the recommendation of the National Law Commission that, for the sake of delivery of justice and to provide relief to the ordinary citizens of the country, there should be 50 judges appointed for every population sample of 10 lakh. We demand of the government that it immediately sanction and allocate an adequate amount for the purpose. So far, the Union has been skirting its responsibility, using the alibi that the establishment of District & Sessions Courts is not within the ambit of its powers but under the jurisdiction of state governments. Given the fact that the state governments are on the verge of bankruptcy, the Union must forthwith allocate requisite funds for the above cause and thus demonstrate its will to ensure that the aam aadmi (ordinary citizen) features in its scheme of ‘development’. There are about 2.5 crore cases pending in the courts of India.

It is no longer taking years to clear the backlog; it is taking decades! The judiciary has become a case befitting the adage, “Justice delayed is justice denied.” Owing to the sorry state of the judiciary, the government sectors are getting away with rampant corruption and near-total lack of accountability. And the lack of an effective law-ensuring mechanism is also leading to reluctance among potential investors to fund projects that would showcase real development. Ensuring adequate manpower in the judiciary will not only give the people justice in time, but also check corruption and red tape in the administration. This will further create an adequate environment for more and more investment in developmental projects.  We believe you are well aware of the situation.

We, hence, appeal to you to make the Union Government release funds for the aforementioned recruitments in the judiciary immediately. Air India can wait. Hoping that we do not have to resort to mass awareness campaigning and a people’s Movement to force the government to act on the said matter.