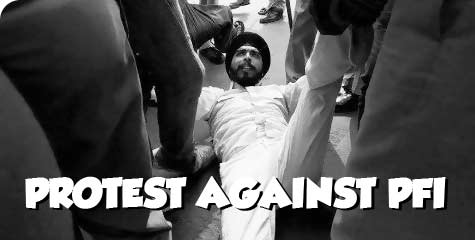 Bhagat Singh Kranti Sena (BSKS) & Ek Hi Vikap "Bharat" youth activists registered their protest against the PFI rally organised at the Ramlila Ground of Delhi. According to a press note issued by the BSKS, the protests were against the Popular Front of India, "the perpetrators of various terrorist activities and love jehad". The protesters, around 25 of them, referred as brave-hearts and patriots in the press note, were arrested and taken to Rajendra Nagar Police Station.

PFI is a predominantly muslim organisation which has come under frequent severe allegations of being the mask of banned Islamic terrorist organisation SIMI and is also accused of getting support from Al-Queda. PFI members had amputated the hands of a Christian professor in Kerala for alleged blasphemy. In this rally that was addressed by the stalwarts of minority appeasement politics, Mulayam Singh Yadav and LJP leaders, PFI was demanding reservation for Muslims in government and private sector.