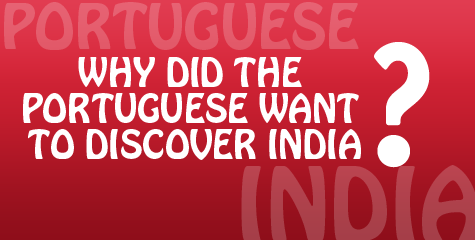 A study of India’s relations with the Western world would be incomplete without a reference to the reasons. Why did the Europeans want a foothold in India?

1. Indian owned ships from Gujarat, Malabar brought spices, other goods from Malacca while on the West coast, and Indian owned ships left from Gujarat while Arab owned ships left from Malabar. Arab ships from India went to Jidda (in the Red Sea) and Ormuz (in the Persian Gulf). From Ormuz they went into smaller boats to Basra, where the trade routes got divided for Trezibond and Aleppo, Damascus. On the shore of the Mediterranean the goods were purchased by Venetians and Genoese for distribution over Europe. From Jidda they went in smaller boats to Suez. From Suez the merchandise crossed the desert to Cairo on camels and then went down the Nile to Alexandria.

2. The most important result of this was that the Arabs became the controllers of eastern spices into Europe. They controlled the trade that passed through the Persian Gulf and the goods bought from Mediterranean ports by merchants from Venice and Genoa. So in a strategic sense the Europeans were totally dependent on the Arabs for their supplies of products originating from the east.

3. All this made the cost of transmitting wares from India to Europe very high with duties and transport constituting nearly one third of the price when wares were shipped from Calicut to Malabar. Inspite of this, Indian goods fetched a very good price in European markets. I guess, what the Europeans did not like is that the Arabs were milking the profits leaving them with marginal benefits. They wanted to earn that profit themselves and break the Arab stranglehold.

4. The maritime nations of Portugal and Spain did not like this. By around 1493-94, the Portuguese had explored the entire West coast of Africa and even proceeded beyond the Cape of Good Hope. Therefore, Vasco D Gama was commissioned to find a sea route to India by which the Portuguese could pocket the huge profits made by the Arabs and merchants of Venice.

The successful visit of Vasco da Gama was followed by a larger fleet under Pedro Alvarez Cabral in 1500. After defeating the Muslim traders and some kings in Kerala he sailed back to Portugal. On the basis of his report submitted to the King of Portugal, he decided to divert all Indian trade to Portugal by curbing the Arab ventures but also to plant the Christian religion in India. To achieve these objectives, he sent Vasco da Gama in 1502 with a fleet of twenty ships. The barbarous and inhuman treatment meted out to the Indians by the Portuguese might compare with Timur. It pains when I read about it.