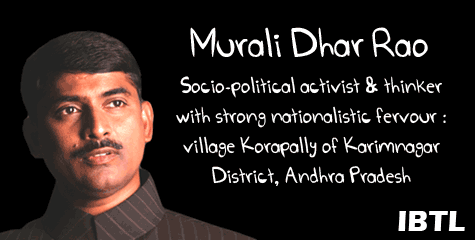 Dear Friends and fellow citizens of India : India’s handloom sector comprising, in livelihood terms, the largest chunk of India’s population after farmers, is in acute distress.. For several years, I have engaged intimately with weavers’ communities across the country, acquainting myself firsthand with their devastating problems, all the more distressing as they are rectifiable through an exercise in political will.

We are all aware of India’s rich heritage of handlooms and handicrafts. The sheer size of this sector is evident from the fact that there are nearly two-and-a-half million handlooms in India (2,377,331 to be precise, as per the Handloom Census, 2010). It is a de-centralized, small-scale, community-based and labour intensive industry, with a legacy of unrivalled craftsmanship... Handloom weaving is a full-time family profession, providing both self-employment and casual employment. Both men and women participate equally.

Recognising the strength of this crucial sector Mahatma Gandhi used it as a symbol and a vital instrument of freedom struggle. Khadi weaving not only became a strong tool of mass mobilization but an emblem of self reliance besides representing the aspirations of millions of Indians for their socio-political freedom. It is really unfortunate that the sector which was a rallying point for swadeshi and self- reliance during freedom movement has got completely neglected in independent India. Thus the weavers are forced to live a life of utter neglect, gross deprivation and absolute scarcity and sustenance has become a challenge for these skilled workers who are involved in manufacturing of excellent fabrics. This community suffered the worst excesses of the British Raj. After Indpendence, they suffered much more.

India is currently the world’s largest producer of handlooms, turning out more than 5 billion metres of fabric in 2005. This accounts for 23 per cent of the total textile production in India. The major handloom weaving states in India are West Bengal, Tamil Nadu, Uttar Pradesh, Andhra Pradesh, Assam and Manipur. Some 12.5 million people are dependent on handloom weaving for their livelihood. This sector plays a vital role in local economies, especially in rural areas.

Multiple schemes claimed to be formulated to improve the conditions of weavers, like training projects to work shed-cum-housing, cluster developments, weaver’s comprehensive welfare inclusive of health insurance, mill gate price scheme, marketing and export promotion, strengthening of weavers services centre, etc have failed in their objective. The condition of the common weavers in the country continue to remain desperate and distraught.

The majority of weavers remain outside the reach of the institutional mechanism and the burden of the weaving community in no way mitigated. Presently, large majority of the weavers do not have the bank accounts and accessing credit from formal institutions remains a distant dream. Barely ten per cent of weavers, mainly those associated with Handloom Cooperatives, receive bank credit and other monetary support from government those outside the cooperative umbrella, get nothing. The Planning Commission acknowledges that 80 per cent of handloom weavers depend on private money lenders who charge exorbitant interest rates. Societies are made to suffer on account of delay in payments running into lakhs of rupees for several months by the marketing organizations created by the government. In Andhra Pardesh alone APCO owes weavers societies money ranging from Rs 2lakh to Rs 56 lakh.

These societies in order to pay weavers take money on credit from money lenders and get heavily indebted in the process. Successive Congress Governments, in AP and at the Centre have neglected this sector for years and have pushed it towards decimation. The condition of weavers, during the rule of Congress led UPA, has deteriorated sharply all across the country, but nowhere more so than in the state of Andhra Pradesh. Suicides by weavers have reached epidemic proportions.

According to state government figures, 700 weavers committed suicide in Andhra Pradesh in recent times (the actual figure is around 2,000).

The reasons are (i) lack of regular job-work, (ii) inadequate wages, (iii) indebtedness, (iv) negligence in paying bills by government agencies to weavers for their products, (v) high cost of production and no remunerative price, (vi) ill health. Even when the government declares financial assistance to the families of the victims, it is not delivered one pretext or the other.

We must bear in mind that weavers are a self-respecting community, taking enormous pride in their skill and workmanship. This renders them unfit for menial labour, with the result that even non-skilled labourers are better paid than weavers. The community has an almost zero crime rate, a testimony to their honest devotion to their craft. They also tend to suffer in silence and thus, their grievances are rarely redressed.

Wages have not increased in the last 15 years. Some sections of handloom weavers are living in hand-to-mouth conditions, with no house or assets.

Keeping the importance of the sector in view - in terms of the sheer numbers of people involved, the size of the handloom economy and the urgency of stemming the tide of weavers’ suicides – the Bharatiya Janata Party has pro-actively taken up the issues confronting weavers at various levels. The party has conducted hundreds of cluster meetings, prepared extensive documentation, undertaken public mobilization and mass contact programmes through its local office bearers.

Allocations for handloom in national and state budgets are being reduced.

In the last ten years, budget allocation has been decreasing gradually and continuously, as the Tables here show. It is also interesting to see the overall budget for the Ministry has been increasing. It has grown by a factor of seven between 1997-98 to 2009-10 – from Rs.739.04 crores to Rs.5398 crores.

In order to highlight the plight of weavers, bring it into public focus and create pressure on the government to take remedial steps, I have decided to sit on three-day hunger strike in Hyderabad, Andhra Pradesh, from 14th to 16th Dec, 2011. Senior party leaders associated with the weaving communities from various states, along with prominent Members of Parliament, will also participate in the programme Sh. Nitin Gadkari Ji, All-India President of the BJP, will address the weavers on the concluding day, 16th Dec, 2011.
The support extended by you in this struggle for revival of handlooms is crucial. Our cause is nothing less than to emancipate millions of weavers from dire poverty and establish them once again as the world’s leading craftsmen, thus preserving a vital aspect of India’s heritage.

Therefore, the following schemes must be extended to the weaver-workers in the master weaver segment along with those in the cooperative fold.

# All the existing loans to the weavers should be waived off.

# New Loans should be provided at the low interest rate of 3% and all the weavers to be provided with credit cards.

# Rs.500 cr to be released immediately for the subsidy of silk and yarn.

# To implement Thrift scheme, Rs.65 cr to be released.

# For homeless and poor weavers rehabilitation and for the construction of work sheds, Rs.30crs to be allotted.

# Handloom parks should be established in all the districts.

# Pension facility of Rs.500 per month must be implemented.

# For weavers health insurance scheme Rs.10 cr to be allotted.

# The handloom reservation Act of 1985 to be implemented efficiently.

# Government should see that all the designs of pochampalli, gadwal, venkatagiri are patent protected.

# P.F and E.S.I should be extended to all the Weavers.

# Electricity should be provided at Subsidy.

New ministry for Handloom should be created. Your participation will go a long way in turning the struggle into a decisive campaign for change.