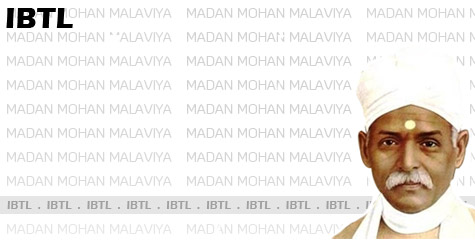 Pandit Madan Mohan Malviya, born in the holy pilgrim city of Prayagraj (later renamed to Allah-abad) on 25th December 1861, was a great Scholar, educationist, man of action and a leader of tile national liberation movement. His ancestors were poor but were known for their Sanskrit scholarship. Madan graduated from the Calcutta University in 1884 and was appointed as a teacher in his school. He attended the Second Congress Session held in Calcutta in 1886 and delivered a speech which held the audience spell-bound. After that, he was offered the editorship of the Hindi weekly, the Hindustan. He became popular for his outspoken views about media as a subject of the British, the abject poverty of the masses and the indifference of the British towards them. He studied law and became a High Court Vakil in 1893. He was elected to the Provincial legislative Council in 1902 and later to the Imperial Legislative Council in 1909.

He founded the Hindu Mahasabha in 1906 to oppose the "divide and rule" policy of the British Government. He virtually withdrew from the legal profession in 1909 but he made an exception in 1922 in regard to the appeal of 225 person condemned to death in connection with the Chauri Chaura riots (Gorakhpur District U.P.) on account of which Mahatma Gandhi suspended the Civil Disobedience movement, and saved 153 accused from the gallows. He started the Abhyudayaas a Hindi weekly in 1907 and made it a daily in 1915. He also started the Maryada a Hindi monthly in 1910 and another Hindi monthly in 1921. He started the Leader, an English daily in October 1909. He was the Chairman of the Board of Directors of the Hindustan Times from 1924 to 1946. He was elected its President in 1909,1918,1932 and 1933.

As Malaviya realized that many Indians were so proud of the English language, customs, manners and civilization that they were getting the feeling that anything Indian was shameful, as an eminent scholar and patriot of the nation that in order for Indian culture to receive due respect by educated men, there had to be a change in the education system. He decided to establish a Hindu University in Varanasi (Benares). Malaviya went on a tour of the whole country to solicit funds for the Hindu university. On February 4th 1916 on the auspicious day of Vasant Panchami, the foundation stone of the Hindu University was laid on the banks of Holy Ganga.

Malviya was a conservative in social matters but wanted to take the leaders of the Hindu community and the Benares pandits with him in matters of social reform. He felt strongly the injustice done to the depressed classes in connection with temple entry and pleaded their cause before the pandits in 1936. He was the President of the All India Seva Samity from 1914 till 1946. He had the courage to differ more than once from Mahatma Gandhi even at the risk of becoming unpopular.