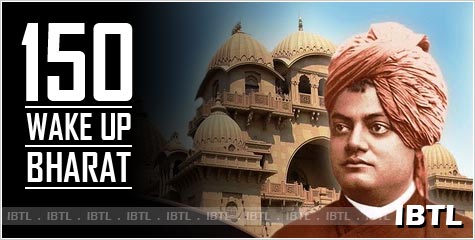 Today's 150th birthdayof the great son of Mother India - Narendra Nath, who, the world knows as Swami Vivekanand. The tribute will be paid from Pashchimbanga (West Bengal), his birthplace, to Gujarat, the land, where another Narendra rules the hearts.

Narendra Modi's Gujarat has planned to dedicate the entire year to Swami Vivekanand, celebrating it as the 'Year of the Youth Power'. Narendra Modi is learned to have quoted, "Today's Bharat is the land of youth. The youth have both zeal and strength. Seeing them empowered with advanced knowledge & technology coupled with fresh enthusiasm frees me from the worries of India's future."

In Gandhinagar, a grand youth convention is being organised at 3 PM at the Mahatma Mandir, which will be webcast live on narendramodi's website. It will be presided over by India's Former President Dr. APJ Abdul Kalam and CM Narendra Modi. The convention will mark the beginning of year long celebrations across the state. Modi has called for celebrating Swami Vivekanand’s 150th birthday with grandeur and in a magnificent manner. He said that Swami Vivekanand had spent maximum time in Gujarat during his tour of the nation and it is in the fitness of things that Gujarat celebrates the event as a guiding force to the nation. The youth should imbibe and emulate his ideals and philosophy in practical life. It was Swami Vivekanand who had inspired the youth with the slogan of ‘India First’.

Narendra Modi's website has listed some of the speeches of Swami Vivekanand which can be read here: Speeches & textfile