Did Sonia attempt to murder Dr. Swamy, he alleges, she did 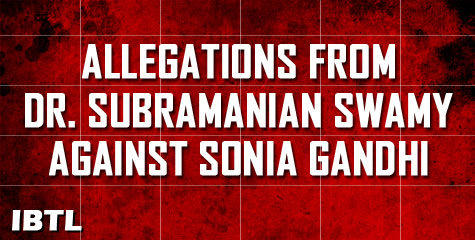 Janata Party President Subramanian Swamy, who currently has grabbed all the limelight over his fight against the government regarding 2G spectrum scam, rattled the nation with his tweets in his personal Twitter account. It seems that Swamy is behind the Congress President, Sonia Gandhi.

According to Swamy's tweet, Sonia attempted to assassin Swamy twice in Rae Bareli and Lucknow, Uttar Pradesh in 2006. Swamy also claimed that he possesses proves for his bombastic statement against Sonia in the form of FIRs which were filed six years back.

"I note your concern for my security. On 23/4/06 Sonia made her first two assassination attempts on me: in Rae Bareli and Lucknow. FIRs exists," reads the tweet by Swamy.

Blowing the trumpet, Swamy in an other tweet said, "many thanks to all patriotic tweeples who kept faith and to God for the decision tday. Now I may bypass Vadra and go straight to Sonia."

Swamy's tweet surfaced when the Supreme Court on Jan 31 stated that Swamy had the locus to seek sanction from the Prime Minister for prosecution of A Raja in 2G scam. The apex court has also added that the sanction by competent authority for prosecution of a public servant has to be granted within a time frame.

Now, on Thursday, Feb 2 when the Supreme Court also quashed 122 2G telecom licenses following the petition filed by Swamy, it seems that the UPA government led by Congress will have a difficult path ahead.