God's special creation Sachin Tendulkar, and few facts about him 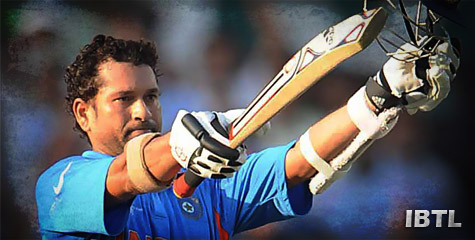 Sachin is ambidextrous. He bats with his right hand but signs autographs and eats or plays table tennis with his left.

A Ganesh devotee, he visits SiddhiVinayak temple in the early hours of the morning.

Sachin Tendulkar was a big bully in the school. Whenever his friend introduced him to a new kid in the school, Tendulkar would invariably ask, "Will I be able to beat him?" He was famous for picking up a fight.

It was his change of school to Shardashram Vidya Mandir in Dadar – close to Shivaji Park on his coach’s advice which marked a turn around in Sachin’s career. He says, "I use to bat in four nets at one strech. Whenever, I use to get tired, Achrekar use to keep a one rupee coin on top of the stumps and say, "Anyone who gets him out will take this coin. If no-one gets him, Sachin takes it." Tendulkar till date contributes this technique in being instrumental for enhancing his concentration. He still treasures the 13 coins earned by him during the practice sessions.

Sachin and his best pal Vinod Kambli hold the World Record of 664 runs stand for Shardashram School in inter-school tournament in 1988.

Sachin was given a pair of pads by his cricket hero Sunil Gavaskar when he was a schoolboy – and he made his Test debut for India against Pakistan aged just 15-years old in 1989 wearing those very pads.

Sachin Tendulkar wanted to become a fast bowler, but when he was rejected by Dennis Lillee's MRF Pace Foundation in 1987. The other youngster turned away by Lillee along with Tendulkar was Sourav Ganguly.

Sachin Tendulkar fielded for Pakistan as a substitute during a one-day practice match against India at the Brabourne Stadium in 1988.

Sachin was just 17 years and 109 days old when he scored his debut Test century against England at Old Trafford back in 1990, finishing up on 119 not out.

Sachin was the first batsman ever to be given out by the third umpire when he was run out against South Africa in the first Test in Durban back in 1992.

Sachin Tendulkar went to watch the movie Roja in 1995 with a beard and disguise. And it all went wrong when his glasses fell off and the crowd in the cinema hall recognised him.

Was without a bat contract during the 1996 world cup where he emerged as the highest run – getter. A famous tire company signed up after that.

Sachin Tendulkar has been granted the Rajiv Gandhi Khel Ratna, Arjuna Award and Padma Shri by Indian government. He is the only Indian cricketer to get all of them.

Sachin Tendulkar has the most number of Stadium Appearances: played on at least 90 different Grounds.

Refused to shoot for a soft drink ad of him smashing cricket balls with a fly swatter. He reportedly told film-maker PrahladKakkar, " That would make me greater that the game." The ad was modified: he hit the balls with a stump.

"I saw him playing on the television and was struck by his technique, so I asked my wife to come and look at him. Now I never saw myself play, but I feel that this player is playing my the sameas I used to play, and she looked at himon television and said yes, there is a similarity between the two ... his compactness, technique, stroke production ... it all seemed to gel!" -  Sir Donald G. Bradman.

"When Tendulkar embarked on a glorious career taming Imran and company, Roger Federer was a name unheard of; Lionel Messi was in his nappies, Usain Bolt was an unknown kid in the Jamaican backwaters. The Berlin Wall was still intact, USSR was one big, big country, Dr Manmohan Singh was yet to "open" the Nehruvian economy. It seems while Time was having his toll on every individual on the face of this planet, he excused one man. Time stands frozen in front of Sachin Tendulkar. We have had champions, we have had legends, but we have never had another Sachin Tendulkar and we never will."? - Time Magazine