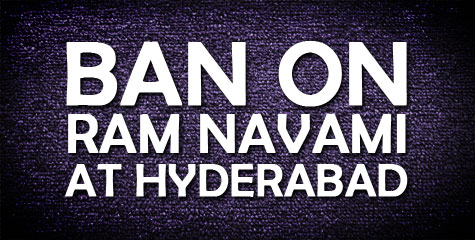 An online petition to "Support Hyderabad's Union with India; Remove Ban on Shri Ram Navami Celebrations" has come into existence on the web. The petition is addressed to the Chief Minister of Andhra Pradesh's Congress government. The copies are to be sent to various state and centre dignitaries, including the Chief Justice of the Supreme Court.

The petition also requests the Chief Minister to take immediate action to release the festival organiser Raja Singh (Corporator, Greater Hyderabad Municipal Corporation) who has been arrested under spurious charges with the alleged aim of deterring peace-loving citizens from holding the festive Shri Ram Navami procession in the city on April 1, 2012. The petition also urges the Government of Andhra Pradesh to not suppress the legitimate voice and religious festivities of the peace-loving Hindu community (89% of the state’s population) due to undue political pressure exerted by the fundamentalist Majlis-e-Ittehadul Muslimeen (MIM), whose support-base is limited to only the extremist fringes of the Muslim community. The petition reminds that in 2011, the “Shobha Yatra” (Sri Ram Navami Procession in Hyderabad), passed off peacefully without any untoward incident implying that there is no excuse to either ban the procession in 2012 or arrest the organisers.

The entire text of the petition letter is reproduced here. You can Sign here.

We humbly urge you to affirm Hyderabad's Union with India by removing the Ban on Ram Navami Celebrations in 2012.

We request the Hon. Chief Minister to take immediate action to release the festival organiser Sri. Raja Singh (Hon. Corporator, Greater Hyderabad Municipal Corporation) who has been arrested under false charges with the aim of deterring peace-loving citizens from holding the festive Shri Ram Navami procession in the city on April 1, 2012.

We urge the Government of Andhra Pradesh to not suppress the legitimate voice and religious festivities of the peace-loving Hindu community (89% of the state’s population) due to undue political pressure exerted by the fundamentalist Majlis-e-Ittehadul Muslimeen (MIM), whose support-base is limited to only the extremist fringes of the Muslim community (9% of the state’s population).

We also humbly remind the Hon. Chief Minister that in 2011, the “Shobha Yatra” (Sri Ram Navami Procession in Hyderabad), passed off peacefully without any untoward incident. So, there is no excuse to either ban the procession in 2012 or arrest the organisers.

We implore the Hon. Chief Minister to take immediate cognisance of the fact that Andhra Pradesh exists today in its present form as a spiritual legacy of Saint Bhadrachala Ramadas, Poet Tallapaka Annamacharya, Swami Ramananda Teertha and Vijayanagara Emperor “Andhra Bhoja” Sri Krishna Deva Raya. All of our state’s luminous personalities revered Sri Rama as an incarnation of Lord Venkateshwara whose blessings will always be with only those who side with Dharma. Will they condone the banning of festive Shri Ram Navami procession in Hyderabad city on April 1, 2012 ?

We request the Hon. Chief Minister to direct the police officials to stop pandering to extremist Jihadi elements by willfully turning a blind eye towards MIM terror and take immediate steps to prevent the atrocities being committed by these extremist culprits on those Lakhs of Indian citizens and who refuse to kowtow to the Talibanisation of Hyderabad.

We gently remind the Government of Andhra Pradesh to revisit history and remember how these treacherous Razakars of MIM had unleashed a terrorist movement starting in 1947 and killed thousands of civilians and soldiers to prevent Hyderabad from joining India.

For the Government of Andhra Pradesh to be held hostage and to abjectly surrender before the thuggish diktats of the same MIM makes us wonder if Hyderabad is within India or if Hyderabad is a separate country where Indian laws are not applicable.

Banning the Sri Ram Navami Procession is highly blasphemous and is akin to banning the Eid-e-Milad-un-Nabi procession (commemorating the birthday of Prophet Mohammad) or banning the Moharram procession (mourning the death of Imam Hussein) – neither of which have been actually banned or obstructed by state officials in Hyderabad. On the other hand, the MIM has demanded state funding of a much grander Eid-e-Milad-un-Nabi celebrations this year, which is likely to be officially approved.

So, why are the Telugu-speaking Hindus being officially discriminated against and that too, openly? The Hindus of Hyderabad only demand an equal right to celebrate their sacred festivals and festive processions with the same religious freedom and official protection that the Muslims have. Is that asking for too much, sir?

Given the religious nature of this issue, we do not expect fair-play or professional neutrality from Mr. Jaffer Javed (Additional Deputy Commissioner of Police) whose team is currently interrogating Sri. Raja Singh on a foisted charge. We therefore request that Sri. Raja Singh be given additional security, be it in jail or outside it.

We urge an end to official abetment and collusion with fanatic Razakars of MIM who endanger India's National Security, worsen the Law and Order situation, commit wanton Atrocities on citizens, indulge in illegal possession of guns and openly violate the fundamental Human Rights enshrined in the Indian Constitution, thereby creating an adverse impact on National Security in this vulnerable region.

We request an immediate enquiry into the drastically worsening Law & Order situation in Hyderabad due to the rabid, communally inflammatory speeches of MIM leader Akbaruddin Owaisi - whose blasphemous public denigration of Lord Shri Rama can be seen in this shocking video.

In 2008, Akbaruddin Owaisi presented Rs 3.5 Lakh as a reward to Abdul Quadeer, the dismissed police constable who is serving life imprisonment for killing his superior officer ACP Sattaiah in Hyderabad during the communal riots of December 1990. This is unacceptable to the people of Andhra Pradesh. Please see the photograph and proof.

His brother and MIM President Asaduddin Owaisi synergised with terrorist group Hezbollah in a secret location in Lebanon. This is unacceptable to the citizens of India. Please see the photographs here.

We urge you to kindly take stringent action against both the Owaisis under National Security Act (NSA) and Section 153A (spreading enmity between communities) of Indian Penal Code (IPC) to stop their repeated transgressions of the law. We wish to respectfully point out that the Government of Andhra Pradesh is duty bound by the Indian Constitution to preserve our country’s security, failing to accomplish which could prove to be quite disgraceful for the Government.

We implore you to please stop these MIM Jihadi monsters while you still can; before they grow more powerful and turn Hyderabad into another Kashmir. This will mark the beginning of a truly meaningful Ugadi or "Yuga Adi" ('the beginning of a new age') - free from MIM terror - for the citizens of Hyderabad and Andhra Pradesh.

With great power comes great responsibility. The citizens of Andhra Pradesh have pinned all their hopes on your elected Government to serve the interests of the majority of the people of the state. Please do not fail us.

In conclusion, we would like to respectfully remind Your Excellency that “Dharmo Rakshati Rakshithah” (Dharma, if protected, will indeed protect you).

IBTL Note: In the video, this hate-monger Owaisi says Mother Kaushalya was born in Haryana, which is an absolute lie. Kaushalya was a daughter of the Kaushal kingdom itself and her name was derived from that only. Unlike the case with other queens, Kaushalya did not come from a royal family. Moreover, it is utterly foolish, or perhaps even sinister to suggest that some village with name Kaushalyapur was Mother Kaushalya's birthplace. By that logic, every village, town or city named Rampur would become Shri Ram's birthplace. IBTL had earlier published articles on the History of Ayodhya from early age to Indian Independence, in both English and Hindi. Very soon we will be publishing the series presenting a factual description of Ayodhya's journey through time. The effort is to address the growing number of 'casual intellectuals' who often suggest out of their sheer ignorance to build a hospital, or a school, or even a shopping mall instead of building a Ram temple/Mosque at the site of the Ram Janmbhoomi, without having an iota of knowledge about Ayodhya's history.