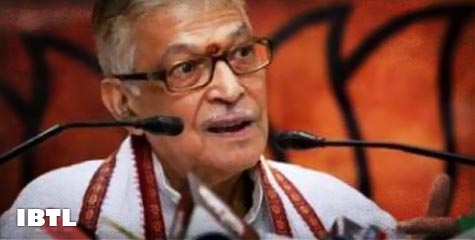 Alleging human rights violation against women belonging to the Hindu minority community in Pakistan, senior BJP leader Murli Manohar Joshi on Wednesday demanded a statement from the government on the flight of over 400 affected families to India.

As other Opposition members created a hue and cry, Home Minister P Chidambaram responded calmly saying that the Govt promises a statement. “After consulting the Prime Minister and the External Affairs Minister, the Government will make a Statement,” Chidambaram told the Lok Sabha.

Murli Manohar Joshi expressed concern over the decreasing percentage of Hindu population in the neighbouring country.

In his speech, Joshi alleged that young women were being kidnapped, raped and converted in the Sindh province of Pakistan and added that an average of 25 girls were falling prey to such crimes every month.

"When the local courts grant some relief to the victims, they are threatened," he said, adding that there has been an exodus of a large number of people from the province and over 400 affected Hindu families have fled to India.

"This is a gross violation of human rights as also of their cultural rights. There are many instances of religious persecution. Large scale atrocities are being carried out against minorities in Pakistan," Joshi said quoting reports.

Observing that the government termed these incidents as "internal matters of Pakistan", the BJP leader said, "It is a matter of regret that our government has remained silent on the issue so far."

While "we want good relations with Pakistan", Joshi said the Prime Minister should assure the House that the government would take up the matter at international human rights fora. Several BJP members stood in support of Joshi and demanded an immediate statement from the government.

In Pakistan, the issue of hindu girls being kidnapping, forcefully converted to Islam and married to muslims was thrust into the spotlight by the case of Rinkle Kumari, a 17-year-old Hindu girl from the town of Mirpur Mathelo in the southern province of Sindh. The case was one of three that recently went before Pakistan's Supreme Court.

In her statement before Supreme Court of Pakistan, Rinkle cried for justice. In her statement, Rinkle said, “In Pakistan there is justice only for Muslims, justice is denied Hindus. Kill me here, now, in court. But do not send me back to the Darul-Aman [Koranic school] ... kill me". But the Muslim elements who kidnapped her had continued saying that Rinkle converted to Islam and married the muslim boy willingly.

Kumari's parents, who are not related to Rachna's family, allege that five men broke into their house in late February, subdued Rinkle with a chloroform-soaked cloth and took her away. The parents say the girl was forced to convert to Islam and marry Naveed Shah, a neighbor. Shah contends Rinkle acted willingly .

Recently, Rachna Kumari, 16, was shopping for dresses in this city's dust-choked bazaar when it happened. The man who her family says abducted her was not a street thug but was a police officer. Rachana’s family says that she was kidnapped for converting to Islam and to marry with her Muslim kidnapper.

In a country where Hindu-dominated India is widely hated as Enemy No. 1, Pakistan's Hindu community endures extortion, disenfranchisement and other forms of discrimination. These days, however, Hindus are obsessed on a surge of kidnappings of teenage girls by young Muslim men who force them to convert and wed. Pakistani human rights activists report as many as 25 cases a month.

Hindus in Pakistan say the forcible conversions follow the same script. The victim, abducted by a young man related to or working for a feudal boss, is taken to a mosque where clerics, along with the prospective groom's family, threaten to harm her and her relatives if she resists.

Almost always, the girl complies, and not long afterward, she is brought to a local court, where a judge, usually a Muslim, rubber-stamps the conversion and marriage, according to Hindu community members who have attended such hearings.

Often the young Muslim man is accompanied by backers armed with rifles. Few members of the girl's family are allowed to appear, and the victim, seeing no way out, signs papers affirming her conversion and marriage.

"In court, usually it's just four or five members of the girl's family against hundreds of armed people for the boy," says B.H. Khurana, a doctor in Jacobabad and a Hindu community leader. "In such a situation when we are unarmed and outnumbered, how can we fight our case in court?"

Prominent Pakistani Muslims have joined Hindu leaders in calling attention to the problem. President Asif Ali Zardari's sister, lawmaker Azra Fazal Pechuho, told parliament last month that a growing number of Hindu girls are being abducted and held at madrasas, or Islamic religious schools, where they are forcibly converted. She and other lawmakers have called for legislation to prohibit the practice.

Asha Kumari, a 16-year-old Hindu girl disappeared March 3 from a beauty parlor in Jacobabad where she was taking a beautician's course, according to her brother, Vinod Kumar, 22. Neither her family nor police could find her until April 13, when she appeared before the Supreme Court, accompanied by her new husband, Bashir Lashari. Like Rinkle, she told the court she had willingly married and embraced Islam.

After one month of her abduction, Rachna appeared in a black burka, surrounded by about 100 of Talani's supporters, many of them armed, said the girl's uncle, Rakesh Kumar. The judge accepted a statement written by Rachna that indicated she had willingly converted and married. Her family contends the document was drafted by Talani's lawyer.

A few weeks later, while out shopping with her new husband's female relatives, Rachna appeared at her grandmother's door and asked for a drink of water. "I asked her, 'Why did you leave us?'" the grandmother, Maharajni Andhrabai, recalled. "She said, 'I was forced to.' She was weeping."

Later, Talani reported that Rachna had disappeared. Talani and her family both say they do not know where she is. Talani is back at work, according to Jacobabad's police chief, Jam Zafrullah Dharejo, who said the allegations against the officer were unfounded.

Now the Kumari family has a singular focus: safeguarding Rachna's 13-year-old sister, Bharti. They've withdrawn her from school and forbidden her to set foot in the bazaar.

While most Hindu organizations from India and Pakistan are expressing concern over this huge Human Rights disaster happening around Pakistan Hindus, the Sonia led UPA government is calm, unconcerned non unresponsive.

Interestingly the psudo-secular self proclaimed rights activists army of Rajdeeps, the Burkhas, the Teestas, the Maheshs and many more woofing sounds are silent on human rights of Hindus in Pakistan and Islamic nations.