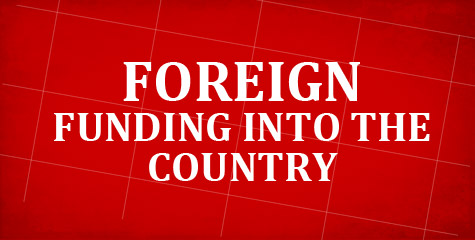 Foreign funding into the country is something we should closely watch. The following report by one of our readers based on a Ministry of Home Affairs' report highlights some of the key points. The inference drawn belongs to the author.

# Top 3 expenses reported by the recipients was 'Establishment Expenses'-35%, 'Rural Development'-18% & ' 'Relief/Rehabilitation of victims of natural calamities'-17% - So almost 1/3rd of the money is used to buy property, build buildings and other establishment expenses. Rural Development & Relief work  is just conversion in the rural areas.

# Rest of the works mentioned in the Top15 purposes are children Welfare, including Maintenance of priests/ preachers/other religious functionaries.- Hence only 35% of the money is spent on more than 12 purposes.

# The MHA report mentios of Donor Country Purpose wise detailsfor 2007-08, Out of 63 Purposes mentioned the top purpose mentioned is quite surprisingly 'Activities other than those mentioned below'-15% of the funds & the bottom purpose is 'Welfare of SC/ST'-.25%

# The MHA report mentions that total of 18,796 organisations have reported to them, out of which the following table will throw light on their Capitalization.

# The inflows pattern for 10 yr period is as per given table.

If one notes the pattern during the NDA period the fund flow increase was in the range of 1.17% - 15.56%, but from 2004 there seems a sudden increase of fund flow. Was there any specific reason for the sudden fund flow during the UPA period.

Though we are all aware of the onslaught of the Chritian Economic Aggression,there is a renewed agenda of Vatican to subdue our Native culture, which has always courageously withstood the onslaught. Their claims to help the Tribals is all farce.

Spread sheet of the workings is Analysis of Foreign Funds all the information in this post have been analysed from the FCRA Report in www.mha.nic.in

Wake up, Awake and be vigil for the Nations mariyatha is at stake. Jai Hind...Vande Mataram