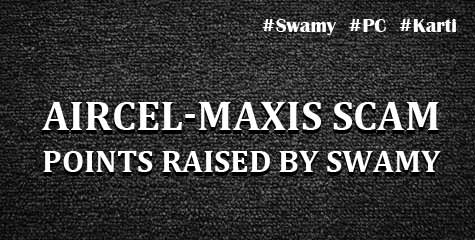 Extracts from the letter written to the Prime Minister Dr Manmohan Singh on April 24, 2012 by Dr Subramanian Swamy. During March first week this year, at a press conference in Chennai, I announced the names and details of several companies where Home Minister P Chidambaram’s son Karti P Chidambaram (DIN No: 01648562) is a Director. Within few days on March 9, 2012, Karti P Chidambaram resigned from the Directorship of one company called Ausbridge Holdings and Investments Pvt. Ltd, where he had more than 94 per cent shares.

After I checked the accounts of this company, I found that this company has invested and have majority of shares in two companies, namely: Advantage Strategic Consulting Pvt. Ltd and Kaiser Surya Samudra Resorts Pvt. Ltd. The accounts of all these companies are totally manipulated and some Balance Sheets were filed even after five years!

As per the financial statements filed by advantage Strategic Consulting Private Limited as on March 31, 2006, there was a financial transaction between this company and Aircel Televentures Ltd of Rs 26,00,444. Aircel Televenture Ltd owned by C Sivasanakran was those days fully controlling two companies namely: Aircel Ltd and Aircel Cellular Ltd, both having GSM licenses working under the brand name Aircel.

As per the analysis of financial statement of concerned companies shows that Karti P Chidambaram controlled advantage Strategic Consulting Private Limited’s the said transaction of Rs 26,00,444 was to acquire shares in Sivasankaran’s Aircel Televentures Ltd to share the booty of around Rs 4,000 crores from Malaysian company Maxis. There is a corresponding share increase tallying with Rs. 26,00,444 can be seen in Aircel Televenture after the financial transaction with Karti controlled company. More over further analysis of financial statement of concerned companies gives impression that soon after the Aircel-Maxis deal, huge amount of more then Rs. 1,300 crore has gone out of Aircel Televentures in the form of loans, without mentioning any mandatory specifics.

These dubious transactions show that as a Finance Minister, P Chidambaram ensured that the FIPB clearance on Aircel-Maxis deal would be cleared, only if his son Karti P Chidambaram controlled company gets share in Sivasankaran’s Aircel Televenutre Ltd to share the booty from Maxis.

I have already sent letters about this scam to the CBI, Enforcement Directorate and Registrar of Companies, highlighting the irregularities, violations and money trail in Karti P Chidambaram’s companies and specifically the doubtful financial transaction with Mr. Sivasankaran’s Aircel televenture, during the period of controversial Aircel-Maxis deal.

But CBI and Enforcement Directorate are only limiting their probe on the role of Dayanidhi Maran and his brother in the Aircel-Maxis deal. It is not possible for the CBI officers who mainly belong to IPS cadre to probe into Union Home Minister and his son’s role, even though they have solid proof. In the ongoing probe on the Aircel-Maxis deal, where CBI had registered FIR, the role of P Chidambaram and his son Karti P Chidambaram should also be thoroughly probed. Such kind of impartial probe is not possible for CBI officials, when P Chidambaram is Home Minister, who controls their cadre—IPS.

More over Reserve Bank of India’s Overseas Investment Division’s monthly report on Outward FDI from India shows that Advantage Strategic Consulting Pvt Ltd has a wholly Owned Subsidiary (WSO) with a similar name in Singapore – Advantage Strategic Consulting Singapore PTE Ltd. The monthly reports from 2006-2012, show that several millions of US Dollars has transferred per month from India to Singapore subsidiary. According to RBI report, this Singapore subsidiary’s major activities are in Financial, Insurance, Real Estate and Business Services. Till 2008 December, Chidambaram was Finance Minister and here question arises is how his son indulged in Financial and Insurance business in India and Singapore? None of these abroad transactions were shown in the financial statements filed with Registrar of Company in Chennai by Karti P Chidambaram controlled companies.

The above mentioned Agenda notes say the 4.62 hectors comprises Survey No: 98/5B1, 98/5B2, 98/6A, 98/6B, 98/9A, 98/9B and 98/7 at Mutukadu Village, Chengalpattu Taluk in Kancheepuram District. Karunanidhi Government had given all clearances in lightning speed to this project at the sensitive coastal zone, violating all norms.

Several people and previous owners of these properties have complained to me that there was a heavy element of coercion happened and they were forced to sell their land to Karti P Chidambaram controlled luxurious resort project. People also said there were several instances of illegal land encroachment, illegal constructions, misuse of ground water, creating acute danger to the environment also happened.

A huge illegal fund flow has happened in this project and the Registrar of Company in Chennai has no documents or details or fund flow of this huge project in their records. The only source of fund to this company shown is a pittance of Rs. 1,50,300 as loan from Mrs. Nalini Chidambaram. About this dubious land purchases details in the sensitive coastal area in Chennai, I have brought to the notice of Tamil Nadu Chief Minister J Jayalalithaa also. CBI and Enforcement Directorate should be directed to assist the state government in this regard.

I have written about this dubious financial transaction which took place during the 2G spectrum scam period to CBI and Enforcement Directorate also along with the complaint on money trail of Rs. 26,00,444 with Sivasankaran’s Aircel Televenutre Ltd.