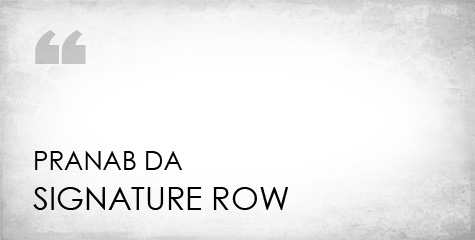 New Delhi, July 3: The returning officer has cleared Pranab Mukherjee’s candidature for President but the BJP has alleged that UPA’s presidential hopeful “fabricated” a letter he submitted to the Calcutta-based Indian Statistical Institute (ISI) after his candidacy was announced.

The BJP circulated two letters, which it claimed carried signatures attributed to Mukherjee but did not match. (See graphic in the end).

The fundamental question is whether Mukherjee signed the resignation letter on June 20 — eight days before he filed the nomination — as he and the ISI have said or if it was backdated. Presidential candidates are not expected to hold offices of profit. Although Mukherjee did not accept any honorarium from the ISI, the post itself is counted as an office of profit by the government.

The resignation letter furnished by the BJP is dated June 20 and it also mentions acceptance by the ISI president and eminent scientist, M.G.K Menon. The letter features a single-word reply attributed to Menon, stating “accepted”, with his purported signature, also dated June 20.

Till late tonight, Menon could not be contacted to confirm the veracity of the noting attributed to him.

The ISI authorities stood by Mukherjee today. “I have the original letter of his resignation in my custody. I am very familiar with his signature. We have no problem whatsoever with it. Therefore, there is nothing we need to do in this,” said director Bimal Roy this evening.

“I have worked with him officially for eight years (since September 2004 when Mukherjee took over as chairperson) and I have personally seen him put his signature on a number of documents for the institution. The signature in the resignation letter is the one I am familiar with. To me there is no controversy here,” Roy added.

The BJP said the other letter it flashed was the one Mukherjee filed before the returning officer today explaining his resignation from the ISI.

The BJP is mulling four options: move the Supreme Court to challenge the validity of Mukherjee’s nomination, petition the Election Commission, file an election petition before the apex court after the election and “go to the people”.

BJP sources conceded that it was “highly improbable” that the court or the Election Commission would take cognisance of the charges and stall the election process midway unless clinching evidence of wrongdoing can be furnished.

Filing a post-poll plaint was the “obvious choice”.

But the BJP sources stressed that by flagging the allegations at the start of their discourse, they might have put Mukherjee and the Congress on the “backfoot”.

“Our main objective is to target Mukherjee and the UPA government’s diminishing credibility in people’s minds. The Congress was celebrating the support it picked up for Mukherjee from across the political spectrum as a major electoral victory. We want to project it as a dubious victory,” a source said.

Mukherjee’s counter-statement placed today sought to answer the objections raised by rival candidate P.A. Sangma, prime among which was that the former finance minister had not relinquished the ISI chairpersonship. Sangma’s objections were rejected by the returning officer.

The BJP also raised doubts over Menon’s terse response and said it buttressed its “apprehensions” about the “authenticity” of Mukherjee’s letter. It claimed the letter was ostensibly “manufactured” after Sangma’s objections because Menon alone was not empowered to accept Mukherjee’s resignation.

Mukherjee, the BJP said, was appointed by a board of directors and it was “doubtful” if the members were aware of his move.

It demanded that Menon should “clarify to the people of India” whether he had received such a document, how it reached him and whether he had accepted the resignation by affixing his signature on the letter itself.

Addressing the media, Ananth Kumar and Satpal Jain, the BJP’s chief representatives campaigning for Sangma, said it was unfortunate that a person aspiring to such a high office should be indulging “in an illegal activity”.

Kumar, a BJP general secretary, added that the “onus of committing this illegal act not only lay on Mukherjee but also on an eminent person like Menon”.