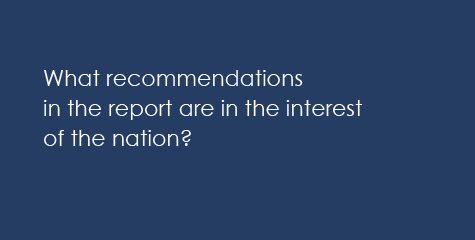 Veteran journalist and head of interlocutors team on J&K Dalip Padgoankar tried hard to defend their report, in a first ever free public interaction on it, here on Saturday. He failed miserably when he chose to keep mum on a commoner’s question, ‘what recommendations in the report are in the interest of the nation?’

While defending the report, though Padgaonkar claimed that he has not ignored the issue of Kashmiri Pandits or refugees. He accepted Islamic radicalization of youth in Kashmir is a fact but has not found any place in the report. For the first time after the release of interlocutors report to public on May 24 the head of interlocutors team on J&K Dalip Padgoankar had offered himself to a free public interaction at a seminar organised by India Foundation at India International Centre.

The seminar was well attended by intellectuals from across the country and many retired military officers. The Opposition Leader in Rajya Sabha and senior BJP leader Arun Jaitley was the principal speaker in the seminar and four member panel of speakers consisted of Dilip Padgoankar, BJP National Executive Member and chief spokesman of J&K Dr Jitendra Singh and former Union Minister Arif Mohammed Khan. The interaction was moderated by BJP national spokesperson Nirmala Sitharaman.
Addressing the seminar Mr Jaitley said that the entire problem of Kashmir is because of faulty Nehruvian vision that has proved costly for nation. He said that Kashmir is an unfinished agenda for Pakistan and Government of India has run out of ideas which is evident from the fact that the UPA Government under Dr Manmohan Singh has been appointing Working Groups and interlocutors without any fair policy.

Mr Jaitley was very critical of Justice Sageer Ahmed report which according to him was prepared when Sageer Ahmed was ailing and finally died after which the report was submitted to State Government without placing it before the leaders who were the members of the Working Group including him (Jaitley).

The BJP leader said that the cross border terrorism is an important factor supporting militancy in J&K and it suits the separatist leaders like Syed Ali Shah Geelani for whom their politics survives only if Kashmir remains tense. He said the concessions can be made to the common people and not to the separatists of Kashmir. He also pointed out that the Kashmir issue might have not existed had veteran freedom fighter and then Home Minister Sardar Patel not been kept out from the scene. He said it was unfortunate that the veteran leader was not given the charge to deal with J and K.

The most dangerous thing in the report is that they (interlocutors) have diluted India’s stand on PoK by changing the nomenclature to Pakistan-administered Kashmir, Jaitley said. It is legitimising Pakistan's claim on the occupied territory, he said. He also pointed out a number of similarities between the recommendations made by the interlocutors and those suggested by former Pakistan President Pervez Musharraf. Musharraf talked about things like joint administration and control and soft borders. This report also touches on opening up the LoC for trade and tourism, he said. The interlocutors' report would take the state back to its 1953 position and this was unacceptable, Jaitley reiterated.

Dr Jitendra Singh forthrightly questioned the psyche and intentions of the interlocutors. He said, “we don’t look at J&K as a dispute or an issue because our position is that J&K is very much a part of Indian Union like any other state. We also reiterate that those who look at J&K as a dispute or an issue are ones who have a vested interest in keeping the Kashmir pot boiling and projecting J&K as disputed for their personnel interests. There is no dispute over J&K either historically or Constitutionally particularly after the 1994 Parliament resolution stating that only un addressed aspect of J&K is how to retrieve the PoK.

Dr Jitendra Singh said the accession of J&K with Indian Union was never conditional and in fact ratified by J&K Assembly in 1954, which consisted of 75 MLAs from NC. The Constitution of J&K applicable from 1957 states in Section 3 that J&K is an integral part of India and there can be no amendment to that. He said Kashmiriyat stands for composite culture and it can’t be restored without the return of Kashmiri Pandits to Valley.

Arif Mohammed Khan said that from his experience as a Minister during the Indira Gandhi’s regime he understands that Kashmir has to be seen from wider perspective. From last 30 years Pakistan and ISI has been working to destablise the region in the name of religion, he added. Expressing his concern on this he said that the issue of J&K requires a deeper analysis and approach.
Defending the report submitted by the Interlocutors Dilip Padgoankar claimed that false allegations are made that the report is partisan. He referred to several pages of report to claim that all the regions have been equal mention in the report. The suggestions to review the provisions of post 1953 Indian Constitution was not made with the intension of encouraging separatist sentiment, he added. He said as of today whatever is the locus standi the report has tried to give the best possible suggestions on each aspect.

He said certain suggestions have been made about AFSPA but not clearly recommended its revocation. In the question answer session that followed several retired army officers were aggrieved at the manner in which the issue of Army and AFSPA in J&K is being handled.﻿﻿