Why should I apologize? - Narendra Modi 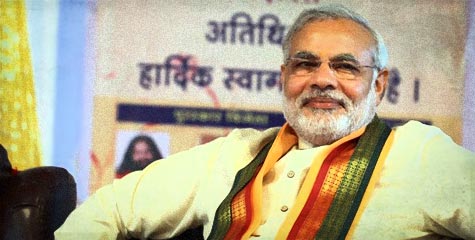 Shahid Siddiqui, editor of the Urdu-language weekly newspaper Nai Duniya, recently spoke to Gujarat chief minister Narendra Modi in a rare interview. During the hour long conversation, Mr. Modi defended his actions during the 2002 riots in his state that left hundreds dead, discussed the long court battles that followed and asked why Gujarat is being “targeted” by critics.

Mr. Modi is considered one of the Bharatiya Janata Party’s strongest candidates for prime minister in the upcoming 2014 elections, but the legacy of the Gujarat riots has also made him one of India’s most controversial and divisive politicians. Mr. Siddiqui, a former member of Parliament from Uttar Pradesh, supplied an audio file of the interview to India Ink. The interview was translated from Urdu and excerpted by Raksha Kumar.

Q. There are a lot of questions on the riots for the past 20 years. Those who were burnt in the train in Godhra, their bodies were brought back to Ahmedabad. Why did you decide to do this? Did you not understand the repercussions of this?
I have answered this question in detail to the SIT [Special Investigation Team] and the Supreme Court. No matter whose body it is, it needs to be returned to the families, right? It was not right for everyone to go to Godhra where there was tension. The second thing is that this train was going to Ahmedabad, and the passengers were all going to Ahmebadad. So how do you get the bodies to reach their families?

Q. You could have silently brought it to the hospitals and handed them over.
That is exactly how it happened. (laughs)

Q. Didn’t you take them out on a procession?
No. Listen to the truth. There is no place in Godhra to keep so many bodies, it is an administrative decision as to how to manage these? Now, all the bodies had to go to north [Ahmedabad], so the question was do we shift it individually or as a huge lot? Do we shift it in the morning or at night? The administration felt that we should shift it at night to reduce tension. The civil hospital in Ahmedabad is congested. And in 2001, it was in the outskirts. So, 16 bodies were brought into the civil hospital. There was no procession.
Q. When the riots broke out, you would have gotten the information that people are dying? What did you do to stop it?
We announced a curfew, appealed to people to be peaceful. My first appeal was to Godhra, to let the police do their duty. The entire police force was asked to get on this job. There had never been a riot this big in India before, and the first riot in the age of 24X7 media. Earlier the government had the time to organize its machinery as the news broke out only in the following day’s newspapers. There will surely be a difference in the speed of the television and police movement! Forces had to compete with the speed of TV news.

Let me tell you what happened in the first 72 hours:

There hasn’t been even one police gun shot, no lathi charge. There was lathi charge where Indira Gandhi’s dead body was kept. They did it there to control the crowds. But, here people were arrested in advance.

Q. But your officials, police and some in the media reported you having told the people to vent out their anger in the first 48 hours? Even Haren Pandya [the late home minister of the state] had said that.
The Supreme Court asked for an investigation to be conducted. We should trust that.

Q. Did you tell the police to stop the rioting at any cost?
Of course! There are shoot at sight orders I gave the police. That is public.

Q. Even at that time I had heard that people were identified and burnt, as though the whole thing was pre-planned.
It is all a lie. Instead, think about how many Muslims were protected then! If they were to be killed systematically, who would have been spared today?

Q. But they say you were in the control room.
The SC [Supreme Court] team has investigated this. Wait until their report is submitted.

Q. Did you go to the refugee camps yourself?
I went everywhere and investigated. There used to be PILs [public interest litigation] in the Gujarat High Court very often those days. And some judgements say that the best facilities were provided to the refugees.

Q. What did the PM say to you at that point?
There is a video (link) on that. Atalji [Atal Bihari Vajpayee] said that he has trust in me.

Q. Senior Congress leaders including Rajiv Gandhi apologized after 1984 [communal riots]. And [Jagdish] Tytler was made to quit politics. You haven’t regretted your actions or apologized until now. It has been 10 years. You should have done it as a head of state.
You should see the statements I made at that point. From that you will understand what Modi thinks and believes. There was a 2005 interview of mine with Prabhu Chawla. He asked me the same question and I told him, why should I apologize? If a government is responsible for this, then it should be hanged in the middle of the road. And they should be hanged as a deterrent – so that no administrator dares to do this again. They should not be forgiven, because that is encouraging the crime. If Modi has sinned, then Modi should be hanged. But, even after trying sincerely to save many lives, some people want to badmouth me due to political reasons, then I cant answer them.

Q. Is there some sorrow in your heart about what happened? That you couldn’t stop it?
First, I think I managed to stop the rioting. I will not admit that I couldn’t.

Q. If a correspondent of mine gives me wrong information and I print it, then I, as an editor, will apologize. There will be a case against me, not him.
I will give you all the documents with my statements. And if you are convinced that I was not involved in it, then you should also publish that you were harsh on me. Then you should say that for the past 10 years we have defamed Modi and you should apologize to me.

Q. Even after the riots, your administration was not willing to deliver justice until the Supreme Court intervened. There was no SIT, the accused were all acquitted.
You are mistaken. The SIT deals with only 8-9 cases, here there have been thousands of FIRs [First Information Report] and arrests. Not one person was punished in 1984 riots. Justice has been delivered in more than 50 cases in my state. Only Best Bakery and Bilkis Bano cases have been moved to other states.

Q. Why were there so many fake encounters in your admin?
Let me tell you what is happening in the state where you are an MP [Member of Parliament] from – Uttar Pradesh.

Mayawati had said she made 396 encounters to maintain normalcy. In my state there were just 12 encounters.

The national human rights commission has said that in the last 10 years (in this country) 400 have been fake. There is an appeal in the supreme court that these should be re-investigated. So, it is a national issue, why is Gujarat being targeted. If you want to talk about Gujarat, talk about UP , talk about the rest of the country.