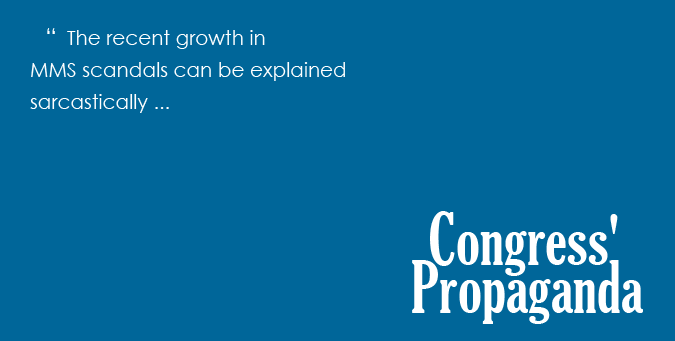 The recent growth in MMS scandals can be explained sarcastically: this nation is run by an MMS, Man Mohan Singh; however people may have their own doubts on how much authority he holds. Apart from pornographic MMS, this nation has seen a series of political MMS scandals; scams that happened under the regime of MMS. Last two days that is 20 and 21 of September 2012 have been dedicated to the cause of covering up these scams.

हिंदी में पढ़ें : भारतीय मीडिया एक निरंकुश हाथी...
20th was an All India strike or Bharat Bandh as Indians like to call, called mainly by the BJP and supported by NDA and other parties. A neutral view will call the strike a success but if the audience look at the media coverage, he or she will get a proper glimpse of media’s propagandist nature; will be bound to think that the media reports are written in Akbar Road or 10 Janpath and telecasted from studios located at Noida or the shadow editors of the channels are representatives of the media cell of Indian National Congress.

The pro-INC channels started reaching the railway stations, hospitals and everywhere they could collect or create stories about the public grief and telecasted them with enhanced sympathy accompanied by crocodile tears. Media knows the pulse of the public. The same public who enjoys holiday at home during strike-day, curses it when he is moving to Khandala for a honeymoon. Public grief remains same in any strike be it called by the BJP or the INC whose strikes get a positive coverage from these media units.

The pro-INC media coverage was mainly based on two principles:

01. call it ineffective but don’t forget to curse BJP for public harassment.
02. distance BJP from the success of the strike.

“50,000 crores loss was suffered due to the strike…The open game of politics…Bandh by politicians, what did the public get?…12,500 crore loss.” – Zee News.

First of all, questionable is their account of loss, how before the day ended they got the figures that differed with number of telecasts? Which one of the two figues 12.5 and 50 is true by the way? Or are they equally false? And if the strike is really ineffective then how did the figures deserve a mention? They should take up courses on deception management. By the way, are these figures the cover-ups for the huge scams varying from CWG to 2G to Coalgate to the 400 Lakh-Crore Indian money safely kept in Swiss banks? Are they trying to cover a man sleeping under February sky just by a hanky? Pansy media’s fancy dreams!

Everyone knows that only the BJP is capable of carrying out a strike nationwide. Else why even the media is reporting BJP men being arrested to control the strike? I don’t really get why Aaj Tak doesn’t understand that public to can have an analytical mind! Or is Aaj Tak avenging Bollywood which doesn’t take it seriously and made it a joke in many of its films? Remember the idiot, silly, stupid channel in “Welcome”? is that why AajTak is showing literary flourish by mimicking “ye tera ghar ye mera ghar” as “ye tera bandh, ye mera bandh?”

Even the non-participation of Shiv Sena and MNS was explained as lack of coordination. You morons, it’s the time of Ganesh Chaturthi, main festival in Maharashtra just like Durgapuja is in Bengal, Nanak Jayanti/Navaratra is in Punjab, Pongal in is Tamilnadu and Chhat in Bihar. They didn’t want to mess the religious festival, that’s it.

Similarly the Bengali news channel ABP Ananda called it “Karmanasha Bandh” or a defunctive strike. Trust this channel was the one which defended the rights to call strikes against TMC.

After luminous failure of the foot soldiers, the commander himself comes to fight the propaganda war. I always appreciate how MMS looks in different poses! Sitting he looks like a statue, standing he looks like a puppet and walking he looks like a robot. What I didn’t know is how he looks like while talking! Yesterday I got my answer. I listened to his propaganda on the National TV and realized this man may not be fit for the Prime Minister but most suitable for Propaganda Minister. As a devoted congress worker he is ready to climb any deception point. Here go the main points of his speech which he made with a high level of breathing as a result of repeated rehearsal and a fear how much the “Almighty” would like it and uttered each word like a robot without any varying emotion and tone:

We know if possible you would import 100% rather than exploring the domestic resources of oil and or rather than researching the alternates for pollution-friendly petrol. You have an invisible commitment towards Arab economy due to obvious reasons. MMS has misguided the public by giving false stats. According to a report published by Department of Petroliam 3 days ago, the loss would become 187,727 crore and not “far more than 2L crore”. In a nation whose citizens believe in stats, he is saying this; trust this guy to be an eminent economist.

Why was subsidy minimized or withdrawn?  We never heard decrement or even thinking of it on illegitimate and illegal Islamic subsidies like Haj subsidy and useless funds to Madrasas and other crap stuffs? Trust this nation has a “secular administration”. Why don’t you minimize and demise them?

I always have seen jokes made on sardars like MMS, but never heard a sardar like MMS making jokes. The only sarcastic flourish he made is “if we didn’t raise price, things would get costlier.” Compare that with, “If I would have not study economics, I would become economist,” “if I would not have Indian citizenship, I would be called as Indian.” Nice PM we have got here.

This man also explained the benefits of FDI: “Money doesn’t grow on trees… FDI would benefit the farmers… 50% of the profit will be invested on building cold storages.”

How would that benefit the farmers? In the same way another congressy minister Veniprasad Verma discovered that price-hke is beneficial for farmers? To make cold stores, we have no need of FDI. Lacking funds? Why there is no lack of fund while building slaughter houses illegally in every street? Only to please Muslims who have no interest in anything except Islam? That’s why Muslim voice is silent on present secular issues. Without FDI we can solve al problems, all we need is a non-appeasing courageous mind.

Read also : News Coverage on 'Bharat Bandh' Exposes Media Hypocrisy
If money does’t grow on tree, think it before saving in Swiss banks and sucking public blood and appeasing Muslims and sending them to tour Arab even when people are hungry. Manmohan Singh rightly said, “I have faith on understanding level of citizens.” But do the public have on yours?