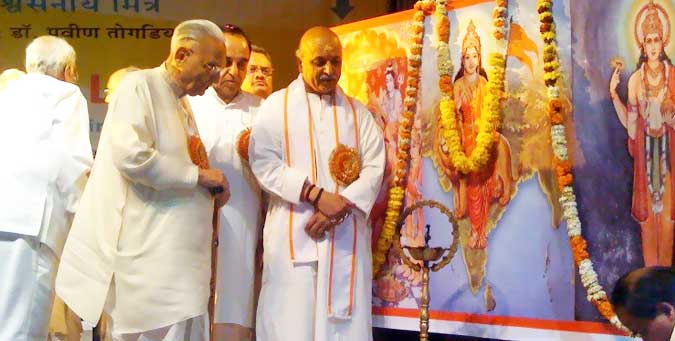 New Delhi, March 23, 2013: In a simple function in Delhi, Hindu Helpline celebrated its 2nd Anniversary. To help Hindus in emergencies related to Travel / Health / Admin / Legal/ Religion etc, HHL has a 24 X 7 Call Canter & so far over 10,000 Hindus have availed of the service.

Hindu Help Line brings out a classic annual planner diary with important info. This year’s planner too was launched in the function.

Tripura’s Tribals presented a magnificent Tribal dance ‘Kojagiri Nrutya’ in the function & the Tribals who came all the way from Tripura for the function were felicitated with great zeal.

Speaking on the occasion, Hindu Ratna Shri Vishnu Hari Dalmia said, Hindi Help Line was the most needed initiative for Hindus. In day today life, Hindus face many problems & there was no organization to hold their hand in the times of such difficulties. I congratulate Dr Togadia & the team for Hindu Help Line.”

Hindu Ratna & Janata Party President Dr Subramanian Swamy in his usual electrifying speech, said, “India is Hindu Rashtra & Hindu Help Line is a significant step forward to take common Hindus along. For bigger issues, there are many organizations; but Hindu felt lonely in personal / social difficulties. Hindu Help Line has filled up that vacuum. It is time now that all Hindus come together to create a renaissance. ‘Hindu Ratna’ matters to me as a proud Hindu.”

Elaborating on the Hindu Help Line further, VHP International Working President Dr Pravin Togadia said, “Hindu Help Line is an emergency service for Hindus. Hindus from anywhere in Bharat can call Hindu Help Line Call Center 24 X 7 for emergencies in Travel / Health / Law / Admin etc. I am glad that over 10,000 Hindus got help in time. From Reaching lunch boxes to the relatives of the patients from remote villages who come to cities for medical treatment to making blood available & from giving an efficient legal aid to sending help to drought affected farmers, Hindu Help Line cares for Hindus. A lot more needs to be done & the Team HHL needs your support on the way ahead. I am glad to be able to get Shri Dalmia & Dr Swamy together here on the Hindu Help Line stage for ‘Hindu Ratna’.“

Launching the special Hindu News Network Face Book system & a news portal Dr Togadia said, “We had it in mind for long as most media – especially electronic media due to their own compulsions cannot reach detailed Hindu news all over. Hindu News Network Face Book Page, portal etc will be a great forum for Hindus to share their news & views even from the remotest village to the tribal belt to many Hindus settled abroad. It is a full-fledged news network with Breaking News, News Updates about happenings nationally & globally, Hindu Culture & Heritage. Science & Tech, Law, Interviews, Sports, Finance & all. There are Book Reviews & Film reviews. Hindu News Network is FOR HINDUS! Together, let us make a real & permanent difference now!”