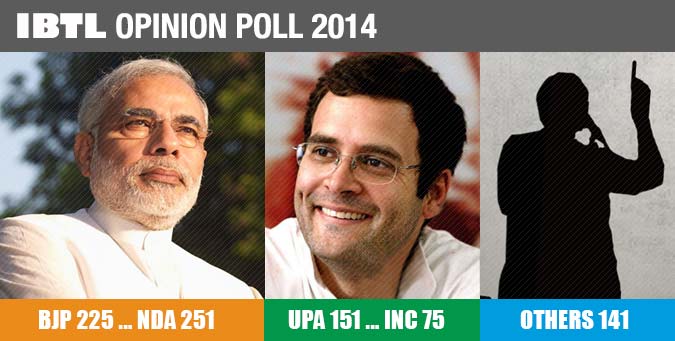 The latest IBTL Opinion Poll predicts a power-packed performance for the NDA led by Narendra Modi. It appears that, not only will the BJP breach its best ever performance (both in terms of seats and vote share) but also ensure that various other regional players are rendered irrelevant in the 2014 elections.

Other Opinion Polls have given the hint that regionally parties, especially the 3 ladies Mamta, Maya and Jayalalitha would play the role of King makers. However our Poll suggest that BJP and NDA’s tally in total would be robust enough to not take the support of any of these parties or even the BJD.

For a detailed statewise analysis please read below. All the states’ analysis and key findings have been presented in descending order of State Seats starting with Uttar Pradesh

Key Findings from UP

BJP almost doubles its vote share. All other parties are getting smashed as per this. This would lead to erosion of Seats for all the parties except BJP and AAP

So, everything that could go wrong is going wrong for the Congress. The party is expected to win just 3 seats, its ally RLD would bag merely 1 seat. However the good news is that possible ally and 1st timer AAP is winning 4 seats

DMK-DMDK-VCK+ alliance is struggling, despite cobbling a formidable front. AIADMK front is way ahead with 25 seats. Left allies would fail to win any seat but would help AIADMK with small vote shares. DMK and BJP alliance are tied at 2nd place with 7 seats each. While Congress alliance would be decimated and would draw yet another blank. This comes as a major shock because many Union Ministers from Congress are from Tamil Nadu.

Our survey indicates that other then Guna and Chhindwara, BJP will rock and sink the boat of Congress in this state where factionalism has added fuel to the party’s destruction fire.

BJP is losing 4 seats compared to 2009, while Congress gains 4. However this is still a good news for BJP, which was sunk in recent Assembly elections due to factionalism and intense corruption charges. The news for Congress gets even worse as Union Railways Minister Malikarjun Kharge is predicted to lose his seat in Gulbarga to the AAP.

The less said of the Home state of BJP PM Candidate, the better. The state is already under NaMo wave for over a decade now

Last time we predicted a whopping 23 seats here. However there is a stagnation which has occurred. It seems that Narendra Modi, other than doing rallies across the country should do 1 grand rally in his Home state and ask every Gujarati to vote for the pride if he has to breach this stagnation, both in terms of vote share and seat share

BJP is predicted to hold on to more than half the votes at 53% vote share, INC would drop to 34% while AAP would get 3% votes

Congress is still latching on to 4 seats and BJP needs a further swing to grab these 4 seats from the Congress.

In last 1 month or so of the BJP govt., people have already started saying that BJP govt. is better than former Congress govt.

The state is engulfed in a massive Modi frenzy. Many voters who voted for smaller parties like that of KL Meena would be backing BJP in Lok Sabha

Like MP and Gujarat, Rajasthan too would send over a score of MPs to the Lok Sabha this time

BJP consolidates its voteshare to more than the psychological 55%, expected to get 56% votes while Congress struggles at 29% voteshare

Note – The survey was done in 3rd and 4th week of January, so parts of the sample would reflect the mood of the people before the AAP Dharna and before the 1st Bills of electricity and water were invoked in 2014

Key Findings from the 7 Sister States