India might see a Rahul vs Modi affair in 2014: CRS 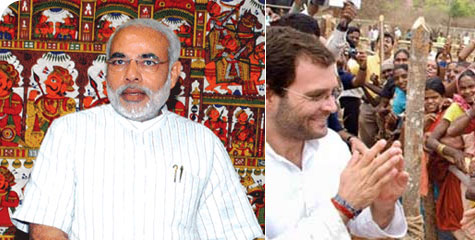 Washington: As the debate on potential prime ministerial contenders for the 2014 elections picks up in India, a US Congressional report says it might just turn out to be a direct contest between controversial Gujarat Chief Minister Narendra Modi and Congress leader Rahul Gandhi.

A latest report on India by the Congressional Research Service (CRS), a bipartisan and independent research wing of the US Congress, finds Modi a strong prime ministerial candidate for the opposition BJP in 2014, while at the same time discussing the prospect of the Congress putting up Rahul Gandhi for the position.

However, the report which gives a detailed account of international political dimensions of India, does not clearly state it would be a Modi vs Gandhi affair in 2014.

“The 2009 polls may have represented a coming out party of sorts for the younger Gandhi, who many expect to be put forward as Congress’ prime ministerial candidate in scheduled 2014 elections,” said the report dated 1 September, which was made public yesterday by the Federation of American Scientists.

CRS reports are meant for consumption of US lawmakers and are generally not available in the public domain.

However, many a times due to efforts of certain think-tanks and non-governmental organisations, these are made available in the public domain.

“Yet this heir-apparent remains dogged by questions about his abilities to lead the party, given a mixed record as an election strategist, uneasy style in public appearances, and reputation for gaffes,” the CRS said.

“Her foreign origins have presented an obstacle and likely was a major factor in her surprising 2004 decision to decline the prime ministership,” the report said, adding that Rahul is widely seen as the most likely heir to Congress leadership.

On the BJP’s front, on the other hand, Modi is among the party’s likely candidates for the prime ministership, the report said.

“At present, the BJP president is Nitin Gadkari, a former Maharashtran official known for his avid support of privatisation. Although still in some disorder in 2011, there are signs that the BJP has made changes necessary to be a formidable challenger in scheduled 2014 polls,” it said.

“These include a more effective branding of the party as one focused on development and good governance rather than emotive, Hindutva-related issues, and Gadkari’s success at quelling intra-party dissidence and, by some accounts, showing superior strategising and organising skills as compared to his predecessors,” the report said.

“Yet among the party’s likely candidates for the prime ministership in future elections is Gujarat Chief Minister Narendra Modi, who has overseen impressive development successes in his state, but who is also dogged by controversy over his alleged complicity in lethal anti-Muslim rioting there in 2002,” it said.

At the same time CRS brings to the notice of lawmakers that Modi has in the past been denied a US visa under an American law barring entry for foreign government officials found to be complicit in severe violations of religious freedom.