After having 2 billion Dollar, 0.25 million ton of wheat from India, Afghanistan to stand with Pakistan in case of a war 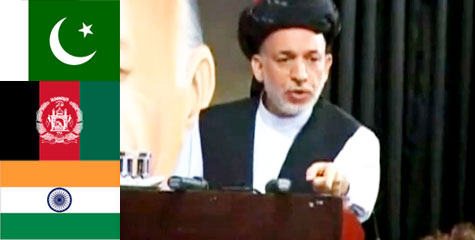 It is said that the stature of 'Guru' is equivalent to that of God. It is also said that the one who extends help in the time of trouble, is a true friend. It is these saliant teachings of Indian culture that kept us alive amid all the adversities. But despite having studied Political Science for 4 years at the Shimla University at the land of the gods, Himachal Pradesh of India, and using that knowledge to rise to becoming Afghanistan's President, Hamid Karzai could not understand the value of the teacher's contribution.

Neither could he understand the value of a true friend. It is our India, that declared from its Parliament in June this year, that to help its neighbour and friend Afghanistan combat the drought, it'll help them with 250000 ton of Wheat. It is our India which has extended the financial aid of 1.5 billion dollars (75 billion Rupees) over past 10 years, and in May this year, committed for an additional 0.5 billion dollars (25 billion Rupees). But, inspite of receiving the bliss of knowledge, the boon of money and the blessings of Food, all from India, Afgan President Hamid Karzai, like a dangerous serpent, has spit venom on India.

In an interview given from his Presidential palace to Pakistan's Geo TV, he said that in the situation of US or India attacking Pakistan, his country will stand with their 'brother', Pakistan. He pledged never to 'deceive' Pakistan. In a parallel development, India has cast its vote in the favour of Pakistan to help it secure a temporary membership in the United Nations' Security Council, a step, that experts have not considered 'wise'.

But this single incident of speech has exposed not only the treachery of Karzai towards friend and well wisher India, but in a way, has characterized Tulsidas' famous lines in the Ramcharitmanas, "Tav ur kumati basi vipreeta, hit anhit maanahu ripu preeta' (your mind has been possessed with evil, that has led you into believing your foe as your friend, and vice-versa).