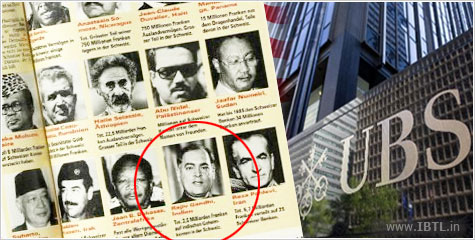 The mantra that L K Advani began to chant in 2009 General Election, one that was transformed into the aspiration of millions of Indians thanks to Baba Ramdev's extensive pan-India campaign under Bharat Swabhiman banner, is now seeming to echo harshly on the deaf ears of the 'sacred family'.

Schweizer Illustrierte, this is the name of the famous Swiss magazine which had in its November 1991 edition, published a photograph of Rajiv Gandhi (among other foreign power-holders) detailing his Swiss bank account which at that time held 2.5 billion francs (at today's conversion rates, this is around 140 billion Rupees or 14000 Crore; adjust inflation, it'll skyrocket to a further enormous figure).

Now, Manohar Lal Sharma, an advocate himself by profession, has filed a Public Interest Litigation in the Supreme Court asking it to issue directions for Sonia Gandhi and Rahul Gandhi to authorize him to bring the money stashed by Rajiv Gandhi since 1989. Sharma has cited his information from the Swiss Magazine “SI 46/1991 - Fluchtgelder - Seiten 40/41,” and “SI 46/1991— flight capital—pages 40/41,” which carries those details.

It'll be intersting to see what stand the apex court takes on the issue, but Sharma has indeed displayed unmatched audacity by directly challenging the topmost chamber of power in the country, namely the Gandhi family.