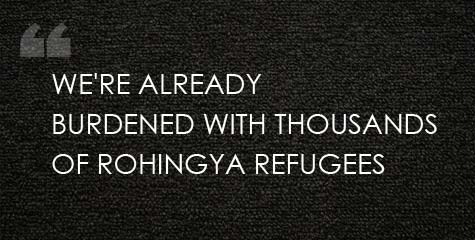 Dhaka (Bangladesh), June 14: Hundreds of Rohingya Muslims fleeing violence in Myanmar tried to enter Bangladesh on Wednesday. Being vigilant, the Bangladesh authorities turned away many of Muslim refugees saying that it do not want to give shelter to them.

Bangladeshi Foreign Minister Dipu Moni on Wednesday said her country was not willing to give shelter to Rohingya refugees, despite UNHCR calls for opening the border to people fleeing the clashes between Muslims and Buddhists in western Myanmar.
"We're already burdened with thousands of Rohingya refugees staying in Bangladesh and we don't want anymore," Moni said.

Bangladesh has reinforced its border with Myanmar, amassing border guards and coast guards who were keeping watch on the River Naf, where rickety fishing boats were filled with Rohingyas, ethnic Muslims from Myanmar's Rakhine State.

The police and witnesses said dozens of fishing boats carrying mostly women and children were crossing the Naf. They said many people were severely injured and many had not eaten for days while drifting on the river waiting for opportunities to try to get into Bangladesh.

The Myanmar government has imposed a state of emergency in the embattled areas to try to bring the situation under control. The unrest began after the police in Rakhine detained three Muslim men in relation to the rape and killing of a local Buddhist woman late last month.

The United Nations High Commissioner for Refugees (UNHCR) has urged Bangladesh government to allow fleeing Rohingya refugees from Myanmar to enter into Bangladesh amid influx of boat people due to ethnic unrest in Rakhine state. Rohingya are a stateless people described by the United Nations as one of the world’s most persecuted minorities.

However, Bangladesh government has denied all requests to give shelter Rohingya infiltrators fleeing violence in Myanmar. The Bangladesh border guards said they had sent back more than 1,000 Rohingya Muslims in the past several days. Bangladesh has put troops on high alert along the 200-kilometer border with Myanmar, said Shamsul Haque, Bangladesh's state minister for home affairs. Bangladeshi officials estimate 300,000 Rohingya Muslims live in the country, with about a tenth of them in two official refugee camps in the southern district of Cox's Bazaar.

So far, Bangladesh has turned back about 1,500 Rohingyas trying to escape by boat in recent days, according to officials there. "We are keeping our eyes open so that nobody can enter Bangladesh illegally," police official Jahangir Alam told Media.

In Myanmar, local Buddhists have fled their burning homes and Myanmar's security forces struggled to contain communal violence Tuesday in a western region where state media reported the death toll climbed to 21.  From Friday through Monday, 21 people have been killed, 21 wounded and 1,662 houses burned down around Rakhine state. The mass violence started Friday in Maungdaw Township, when what was said to be a mob of 1,000 Muslims – described as "terrorists" in the state media – went on a rampage and had to be restrained by armed troops.
It added that security forces had to intervene as communal tensions erupted Monday and Tuesday in several parts of Sittwe. An AP journalist saw the corpses of four people killed in the city, though it is not clear they were accounted for in the death toll reported by television.

It is reported that Myanmar Defense Minister Gen. Hla Min visited refugee camps for Rakhines opened at Buddhist monasteries and distributing food and other relief goods. He also met Muslim elders in Sittwe and visiting camps where Muslim villagers are sheltered, to which he also gave relief goods. It was the first time state television showed a camp housing Muslims.

Myanmar government has regarded the Rohingyas as illegal migrants from Bangladesh and has rendered them stateless by denying citizenship. Although some are recent settlers, many have lived in Myanmar for generations and rights groups say they suffer severe discrimination.

Bangladesh has stepped up security along its 200-kilometre border with Myanmar to prevent an influx of Rohingya refugees. The government said in a statement on Tuesday that it was consulting with Myanmar “to ensure that developments in the Rakhine state do not have any trans-boundary spill-over”. Bangladeshi officials estimate that 300,000 Rohingya people live in the country, with only about a tenth of them in two official refugee camps in the southern district of Cox’s Bazaar.