The Hidden Environmental Costs of Hamburgers 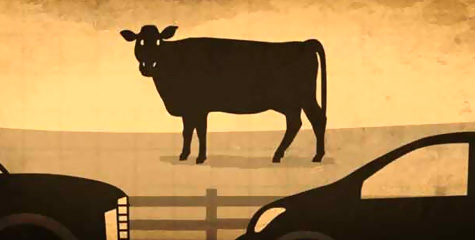 It's time to confront a major threat to our global environment: cows. Yup - turns out that livestock are a major contributor to greenhouse gas pollution. Right up there with cars, planes and trains.

And at the rate we're producing beef worldwide, emissions from cows - along with other harmful practices in beef production - threaten to mess up our climate, land and water. Big time.

On average, Americans eat three times more meat than people in other countries. From the end of World War II to the mid---1970s, beef consumption per person doubled. The U.S. is now the largest beef producer in the world. Our beef industry is a powerhouse worth $74 billion a year and providing millions of jobs. Today, more and more Americans are choosing chicken and pork, even tofu. But much of the meat we eat is still beef Let's look at an all---American food: the hamburger. On average, we eat about three burgers per week. So let's see: If all 313 million Americans eat three burgers per week, that's 156 burgers per person per year. All together, that's more than 48 billion burgers every year.

A quarter---pounder at a fast food joint costs 3 or 4 bucks. That's pretty cheap. But what we don't pay for at the counter, we end up paying for in other ways. What are the hidden costs?

First of all, cows take up a lot of space. Worldwide, livestock use 30 percent of the earth's entire land area - that's counting pastures and land used to grow grain for feed. We use about eight times as much land for feeding animals as for feeding humans.

And in places like Brazil, acres of forest are still being cleared for livestock - which creates pollution and also removes a perfect sponge for absorbing carbon dioxide. And did someone mention water? It takes about 1,800 gallons of water to make a single pound of grain---fed beef - that's about four times the amount for chicken and more than 10 times the amount for a pound of wheat.