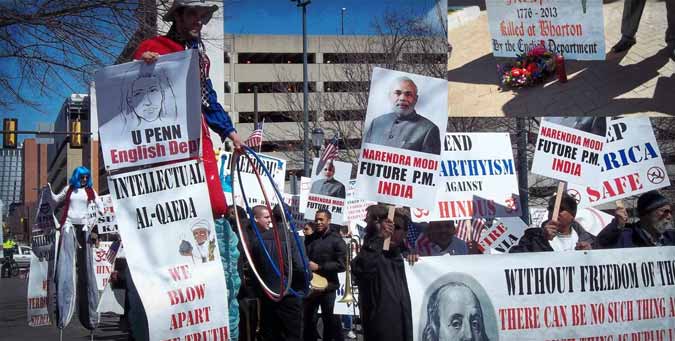 A collection of individuals came under the banner of Americans for Free Speech and conducted a spectacular rally on March 23rd at the University of Pennsylvania campus in Philadelphia to protest the violations of the free-speech rights of students by the faculty of the university. The rally which was referred as the “Wharton Satyagraha” attracted hundreds of people from various places who braved the chilly weather to participate in the protest. It was also supported by several people affiliated with the university. Satyagraha is a way of non-violent protest that uses moral force to insist on the truth. The word was used to describe the protests of Mahatma Gandhi.

The Satyagraha consisted of a parade followed by a rally outside the event conducted by the student run Wharton India Economic Forum which had rescinded the invitation to Narendra Modi after faculty members at the university objected to Modi as the speaker. The parade was kicked off by an inspiring speech delivered by Satya Dosapati who drew parallels with Gandhi’s march against salt tax and Martin Luther King’s march for civil rights. The highlight of the parade was a memorial service conducted in remembrance of free-speech outside the building housing the Department of English as many protesters tied their mouths with black ribbons. As the band played funeral music, a wreath was placed and a candle was lit in front of a headstone that read, "In Memory of Free Speech 1776-2013. Killed at Wharton by the English Department."

The protesters then made their way to the site of the rally to the revolutionary tune of Beethoven’s Fifth Symphony. Among the speakers at the rally were Saswati Sarkar, a professor at the university, and Peter Bonilla of the Foundation for Individual Rights in Education (FIRE). Professor Alan Kors, the founder of FIRE, and former faculty member Francisco Gil-White who was himself a victim of the university’s violation of free-speech rights sent in statements that were read out. Professor Kors highlighted the selective standards of the university and pointed out that the university would have come out in favor of Muslims if they had been offended. Francisco Gil-White sent in his statement from Mexico City. Well known activist Richard Benkin sent a recording of his speech. All speeches and statements were repeatedly interrupted by loud cheers and applause.

The protesters carried several placards and banners during the Satyagraha. One placard read, “First they came for the Hindus...” while others mocked the faculty members by portraying them as members of the “Intellectual Al Qaeda.” A few placards highlighted the wrong claims about the 2002 Gujarat riots with the claims rubber stamped with the word “Lie” and the words “Professors, Don’t Lie” appearing under the highlighted claim. Still others quoted Benjamin Franklin and the First Amendment of the American Constitution. There were also messages supporting Narendra Modi and opposing Communism. One banner that conveyed a poignant message was the image of Statue of Liberty being gagged by a person with the word “UPenn” stamped on his headgear. Several students and faculty members who did not want to openly participate in the rally fearing retaliation from the university’s authorities walked up to the protesters and thanked them. Many of them expressed support on Facebook and other social media outlets.

“This is just the first of the Satyagrahas this country will see,” said Prasad Yalamanchi who was one of the organizers of the protest.

Video and photos of the Wharton Satyagraha can be seen at www.whartonprotest.blogspot.in