An Aam Aadmi's open letter to the Prime Minister of India 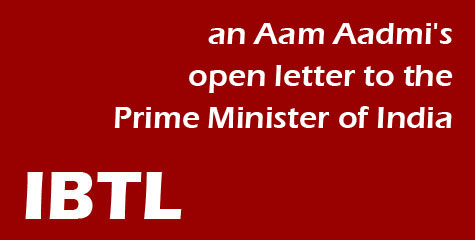 Dear PM of India, Err, let me start by informing you that I am an aam aadmi, in whose name your government has come into power, so I do not know how to write an official letter to the Prime Minister of this great nation, forgive me if you feel this letter of mine is “immature“. Let me come to topic.

2009 was the first General election which I first exercised my right as a citizen to vote a party to government. Do not in your weirdest dreams, think that I voted for you, but now I feel very proud that I did not vote for you. Now please do not call Digvijaya to know whether I am an RSS terrorist. There are a million others who did not vote for your government. Now, I only wanted to give an Idea about my age, which is one fourth of your age and half the age of “youth icon” Rahul Baba. Hope you could calculate my age now, as there is a rumour around that you have got a doctorate in economics.

So I heard that you are on a foreign official tour, in United Nations building, I don’t know where it is. I saw a speech of Isreal Prime Minister speaking a day before you opened your divine mouth. Let me tell you frankly, I was impressed that there exist a country in the world whose Prime Minister defends the nationalism of its majority population. I heard in middle of his speech, he asked something like, “have you no shame” , do not get hurt when I ask you this, was that question directed to you ?

Israel is not my motherland, but India is. I was wondering what my PM will speak at united nations, because no one, literally no one, in my family or my friends family understand when you speak. I was really wondering why people choose you again, or did you really rig the evms ? Err, I again forgot that you are not elected, in fact people defeated you in some past elections, and Sonia selected you. But there is absolutely nothing which technology cannot decode, and I read in some newspaper that, you have supported Palestine state? Also You said something like “selective approach to terrorism”, for Gods sake, can you explain what did you mean by that?

I am not very much informed about the crisis in Palestine, but I know about Kashmir. My brothers were driven out, some were murdered, and their temples were desecrated by the separatist a few decades ago. You have not spoken a word about that? What gives you the authority to speak about an Issue regarding foreign countries, when you do not dare to speak about the issues concerning the majority population, Let me remind you what you said some years ago. You made a great secular speech “First right to Indian resources belong to Muslims”. Can you explain what the hell did you mean by it?

Ever since the person who selected you for the TOP JOB is ill, I see you frequently talking to media with funny expressions. My little bro made a great mess in my home, for not allowing to see you speak, because he thought it is some Mickey Mouse show in cartoon network. Please do not send NSG commandos to my home now, forgive my little Brother. Then , I saw in the news that you said, “My ministers enjoy my confidence”. Who in the world cares about who enjoy your confidence, even you made a somewhat similar statement an year ago Raja went to Tihar. Now Raja has become famous in Tihar and in the end it seems you also will have to share Raja’s cell in Tihar ?

I know this was the day when you were incarnated in to this world, to save the corrupts. Also I heard you are celebrating your birthday in New York. Look at your wife, a similar looking lady died today in India. She was beaten midnight by your Delhi Police which is directly under the minister who enjoys your confidence? It was unfortunate as you said, and we do not need your certificate to call an incident unfortunate, but when you said, there was no option, I was really observing your better half who looks like Rajbala. If your wife understands your language, ask her about this someday!

Yet I hear people calling you, Honest. Then I was reminded of Shakespeare play “Julius Caesar” and the famous speech of Antony “Yet Brutus is an Honourable man”.