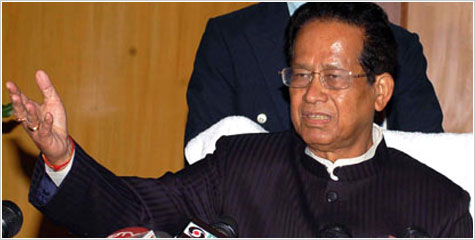 Arunudoy Dehotia, publicity chief of Paresh Barua-headed wing of ULFA has accused Prime Minister Manmohan Singh and Assam Chief Minister Tarun Gogoi of secretly giving away Assam's land to Bangladesh in the recent land swap agreement. He said, "Chief minister Tarun Gogoi and non-genuine resident of Assam Prime Minister Manmohan Singh happily gave away Assam's land to Bangladesh without informing the indigenous people of the state ...By secretly giving away Assam's land Gogoi and Singh have tarnished our history. As Assamese we are honour bound to maintain the geographical boundary of our state."

Dehotia further claimed that a few power hungry people had made Assam a sacrificial lamb and dubbed those who protest against such moves as Maoists. He also accused ruling Congress of being puppets in the hands of promoters of big dams. Dehotia said that Gogoi and his ministers have launched a false propoganda that those agitating for halting the construction of big dam projects are ULFA while ULFA always supports any organisation that works for the interest of Assam.