Why and how Congress wants to demolish image of Narendra Modi 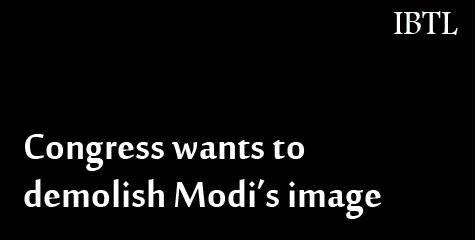 In his latest Expressbuzz article ‘Anna, Maya, Modi: Congress declares axis of evil’, Prabhu Chawla writes how Congress is on move to neutralize its nightmares Narendra Modi, Mayavati, team Anna and CAG Vinod Rai to get a decisive victory in the 2012 assembly polls and the 2014 general elections. Chawla makes a point that not BJP and left, but these individuals Modi, Mayavati, team Anna are real threat to Congress rule.

On Congress’s plan to neutralize its one of the nightmares Narendra Modi, Shri Prabhu Chawla writes:

# Congress wants to establish Rahul’s leadership in Gujarat, where Assembly elections are due in November 2012. -After having failed to create an alternative leader to Modi, the Congress has now mobilized all its energy to create dissensions within the bureaucracy and dig deep into land allotments to various companies, including the Tatas.

# Congress is not going to raise the 2002 riots issue but wants to demolish Modi’s image of a development icon.

# Congress has put together a crack team comprising a few retired journalists, civil servants, advocates and even ad agencies to draw up the road map for forcing Modi into a corner.

# A Gujarat victory may also help the party to win the 2014 general elections, even if some allies fare badly or even ditch the Congress.