Why should we not give bails to BJP members, asks Delhi High Court 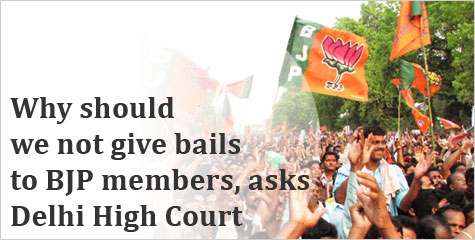 The trial court's order not to grant bail to the accused, who have been hailed as whistle blowers by opposition, but booked for taking bribes by the Delhi Police, was challenged in the High Court. Kulkarni claimed in his petition that he had done a commendable job by exposing a conspiracy, something which should have been praised instead.

Kulkarni along with 3 BJP MPs had exposed the UPA governments' attempts to bribe BJP MPs to save the government which was reduced to a minority after the left parties had withdrawn support from them. The 3 MPs had shown currency notes allegedly given to them at the behest of Congress for cross voting in the Confidence motion on 22 July, 2008.

Meanwhile, another accused in the case BJP MP Ashok Agarwal, has also filed for anticipatory bail.