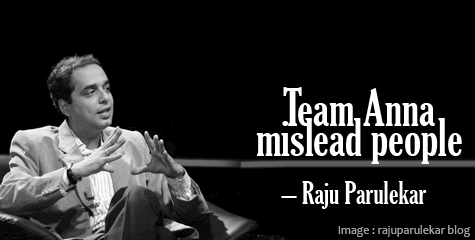 Raju Parulekar, who used to blog for Team Anna until recently, has said that the team has made him into a demigod so that they could blackmail the government to serve their own interests. He alleged that Kehriwal, Kiran Bedi, Prashant Bhushan and Maneesh Sisaudia have hijacked the team and they speak in media on a diverse range of issues as if they're experts on everything.

Raju has directly questioned Anna that whose pressure is there on him which is preventing him from expelling Prashant Bhushan from core team, even when his anti-national nuances are exposed to the nation. He's also questioned the financial transactions and the hidden aspirations of Sisaudia and Kejriwal.

Raju further alleged that Team Anna mislead people into believing that this self-styled movement will transform the nation into a paradise and Jan Lokpal bill alone will remove half the corruption from daily lives. Raju has questioned if a bunch of 20 odd people with hidden aspirations and possibly malafide intentions wil drive the nation. He asked if any one knows about the background of those who're in the team, other than the famous few like Kiran Bedi, Bhushans, Kejriwal and Sisaudia.

Raju even went on saying that the only difference between this 'Team Anna' and the political parties is the moral strength of Anna Hazare behind whose shadow this selfish bunch is hiding and has put a fake label of 'patriotism' upon them.