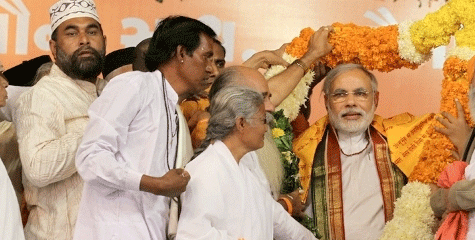 Mr. Modi also hailed the success story of ‘Gujarat’ fortnightly which achieved a circulation of 1,11,111 engaged as it is in conveying the development stories to the readers.

He thanked about 6,000 people who came from the seven talukas of the district and took stage at a small place like Bodeli. He had begun the mission from Ahmedabad two months back, having observed district-level fast at Dwarka, Navsari and Patan earlier. There would be 33 such fasts.

Speaking about fast he is undertaking as part of Sadbhavna Mission as a penance for the last two months, he said, it is to show to the world the people’s strength in this land of Mahatma Gandhi and Sardar Patel and not to look down upon anybody. He considered six-crore Gujaratis as one family, as he tries to ensure their bright future.

The state is set to produce 50-lakh motorcars and the automobile industry alone will create job opportunities for 5-crore people. Gujarat is the only state which has achieved 11 per cent growth in agriculture.

However, he regretted, a handful of people backed by professional agents with vested interests were bent on maligning Gujarat and trying to incite farmers on issues like seeds, fertilizers, pesticides and power.

BJP Vice-President and Rajya Sabha Member Purshottam Rupala said the Sadbhavna Mission is to bring people together living in different parts of the state with different background. The Congress party had for long neglected development of the tribal region.

Vidhan Sabha Speaker Ganpat Vasava said the Chief Minister has ensured an all round development of the state through good governance and implementation of various projects and schemes, notably Vanbandhu Kalyan Yojna for the tribal region which has overshot the budget of Rs.15,000-crore by another Rs.2,000-crore.

Water Supply Minister Nitin Patel and Minister of State for Law Pradeepsinhji Jadeja also spoke on the occasion. A number of other ministers, parliamentary secretaries, Vadodara mayor, legislators, office-bearers of district, taulakas, city, town and villages were also present on the occasion.