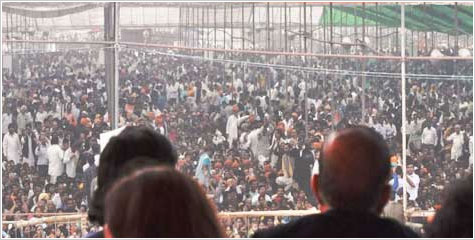 BJP's grand old man, yet more energetic than any other politician of his era, L K Advani yesterday completed his 38 day old Jan Chetana Yatra with the final grand rally at the Ramlila Maidan of Delhi. The Ramila Maidan which had nearly 6 month ago, become witness to the mid-night atrocities committed against hungry sleeping people who had assembled for Yog guru Swami Ramdev's agitation, leading to the tragic death of one of his supporters, Rajbala, yesterday witnessed the national and regional leaders from and beyond NDA assembled to address the huge gathering.

Proving his critics wrong yet again, Advani is perhaps the only politician in the world to travel across the length and breadth of this big country at this age. His yatra covered 22 states and 5 union territories, getting moderate to massive support from people even in states where BJP is not a power to reackon with, e.g. Tamilnadu. While the ruling Congress party had termed the entire exercise as his bit to throw in hat for PMship and that was the impression created and propagated with sections of media, whose neutrality has long been disputed, Advani, throughout the Yatra maintained his recourse, "This yatra has got nothing to do with L K Advani. This yatra is for you!".

Though the assessment of the long term impact of the Yatra is something for the political pundits to do, its immediate impact is quite conspicuous. BJP's cadre is known to have got into an active mode throughout India with this Yatra. Of course, this not only fuelled speculation about the possibility of a mid-term polls, which has also been catalysed by the mercurial attitude of Mamta Bannerjee who recently made it amply clear that it's the Congress which needs her support in Delhi, and she doesn't need Congress in Kolkata. Another major and conspicuous achievement of the Yatra was a consolidation of NDA allies and new potential allies. The presence of Thambidurai as Jayalalitha's ambassador at Ramlila Ground yesterday, and that of Ramdas Athavale, was a testimony to the fact that NDA was spreading. The leaders of Akali Dal, Shivsena's Anant Geete and JDU's Sharad Yadav were also present at the Ramlila ground where the Yatra culminated. Moreover, the fact that the Yatra was flagged off by Nitish Kumar from Bihar and received with full fan-fare by Narendra Modi in Gujarat, also dispelled the notions of divide that a section of media had been busy propagating, as a matter of hobby, or may be due to other reasons. During the Yatra, Advani had taken a one-day break to be at Delhi on his birthday. The unveil ceremony of his book 'Swadesh' was attended by 3 BJP Chief Ministers, those of MP, Chhatisgarh, Jharkhand and central leaders like Sushma Swaraj, Arun Jaitley and Rajnath Singh. Those who covered the event bore witness to the 'family-like' environment that prevails in the BJP in contrast to what is normally highlighted.

Speaking at the occasion, Advani termed the act of Congress regime jailing BJP's 'whistle-blower' MPs who had exposed the Cash-for-vote scam and who were released 2 days ago by the Delhi High Court on the basis of lack of any evidence against them, as abominable. Advani termed his Yatra as the most successful even when compared against the Ram Rath Yatra of 90s. Both Sushma Swaraj and L K Advani reiterated that the battle against corruption will only get more fierce from here. Most important was the announcement made by Advani that all MPs of NDA, in Loksabha and Rajyasabha, will submit a signed pledge to the speaker of Loksabha and Chairman of Rajyasabha respectively, that they don't own, directly or indirectly, any funds illegally held in foreign banks accounts. This is supposed to give a major edge to BJP and NDA against Congress and allies as they usual "all parties are equally corrupt" refrain will come to an end, with all NDA MPs submitting a solemn declaration in this regard.

Sushma Swaraj lambasted Manmohan Singh for his complete inability to connect with the problems of people.  Swaraj pointed out that 6 major scams have taken place during this most-corrupt UPA regime, namely, 2G scam, CWG scam, Aadarsh society scam, KG Basin scam, Air India plane purchase scam, and cash-for-vote scam. Sushma said that they'll fight the cause of the common man in the parliament and the BJP cadre will fight it out on the streets, under the guidance of Nitin Gadkari. Maintaining her usual oratory charm, Sushma completed her popular sher that she'd used to ask Manmohan Singh in parliament on scams, "Tu idhar udhar ki na baat kar, yeh bata ki qaafila kyon loota; hamein rahzanon se gila nahin, teri rehbari ka sawaal hai."(Don't talk here and there, tell us why the caravan was robbed. We have no grouse against dacoits but it is a question of your leadership) with "Main batayoon ki kafila kyon luta, tera rahjanon se tha vasta, mujhe rahjanon se gila nahin, teri rahbari pe malaal hai" (Let me tell you why caravan was robbed - you were in league with the robbers. Why complain against the robbers, What we regret is your leadership!).