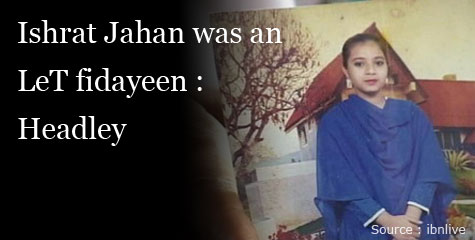 The SIT probing the encounter case of the 19 year old girl Ishrat Jahaan has claimed that the encounter was a fake and that she alongwith 3 of her male colleagues was killed before the encounter. The court is still to deliver its verdict on the issue. But the kind of attitude a section of media has exhibited in reporting this development betrays their sympathy for terroritsts, or their vested interests. Quite many newspapers and TV Channels' websites are carrying a version of the news that delibeately and with malafide intent attempts at hiding the fact that Lashkar-e-toiba man David Colman Headly himself had admitted to NIA that Ishart was associated with LeT.

They have even blacked out any mention of the fact that the other 3 killed, Javed Sheikh, Amzad Ali and Jeeshan Johar also had links with LeT with one of them being a Pakistani citizen. These newspapers had themselves published detailed news regarding their being terrorist in July last year. Even more recently, just last month, a newspaper (links provided below) had published the statement of an SIT member that Ishrat was confirmed to be an LeT member. In fact, as per the claim of Gujarat police, and Hedley's revealations, they were conspiring to kill Narendra Modi and had even set up meetings at a hotel in Ahmedabad.

All these facts have been blacked out while reporting this news today. Instead, many leading newspapers have made the statements of Ishrat's mother, father, brother and uncle calling her a 'martyr', asking to 'bring their daughter back', and asking 'What did Modi get by killing Ishrat', as if Modi himself went and shot at her. The "sacred duty" of a section of media towards maligning Modi is no secret, but in the process, they've become so blind that they are sympathising with terrorists and portraying them as innocents. If a Congress General Secretary refers to Osama Bin Laden as "Osama Ji", that's understandable for that's how appeasement politics works.

If a resolution to 'forgive' Afzal Guru is attempted at J & K assembly, even that is understandable for the same reason. But, has our media also got into these political compulsions, for certain vested interests, or is this section of our media catering to a wide-spread, more dangerous conspiracy against nation? Indeed, a fake encounter is an offense and the law will take its course to punish the offenders if their guilt is proven, but at whose behest is this section of media operating to malign Modi and offering tributes to an "innocent" terrorist? Is misleading the nation not an act that characterizes this section of our media as a traitor? If yes, any punishment is small for this malafide act.

SIT member's statement on Ishrat's being a terrorist (October 2011) : Click to read : Times of India