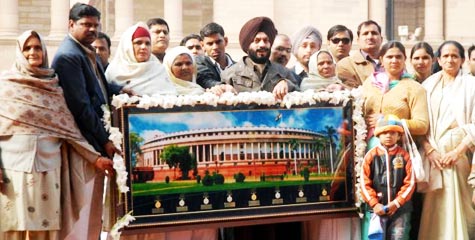 The supreme court Judgement : “The incident, which resulted in heavy casualties, has shaken the entire nation and the collective conscience of the society will be satisfied if the capital punishment is awarded to the offender.”

‘Take Afzal to gallows or take back Ashok Chakra’ : The widow of an assistant security officer killed when Parliament came under a terrorist attack threatened to return the Ashok Chakra he had received posthumously if Afzal Guru was allowed clemency. A resident of Sikar, Ms Prem Devi said there would be no point in holding on to the totem of honour given to her husband, JP Yadav, for the sacrifice he had made if the militant involved in the attack was to be let off.

Ms Devi said clemency would boost militancy, discouraging women from permitting their husbands or sons to sacrifice their lives for the country. She said her family had long been waiting for the court’s verdict on the Afzal Guru case and now that he was deemed guilty, politics was coming to his rescue.

According to her, Afzal should be hanged. If he isn’t, she plans persuading others to return their government-awarded bravery medals. The Supreme Court has given Afzal the death sentence for his involvement in the 2001 attack on Parliament. But his wife has filed a mercy petition for the President, Dr APJ Abdul Kalam, to consider.

In another development, widows of security men who died in the Parliament attack today met President Dr APJ Abdul Kalam to plead against mercy for Mohammad Afzal who faces execution in connection with the 2001 terror strike. “We told the President that if one terrorist is spared, 100,000 more will come up,” Ms Ganga Devi, widow of sub-inspector Nanak Chand, said after meeting Dr Kalam. “It’s karva chauth today and we pleaded for the execution of Afzal.” The delegation demanded a fixed time-frame within which the Cabinet should tender its advice the President on mercy petitions.
Azad a traitor: Rajnath

Bitta urges President not to pardon Afzal : The All India Anti-Terrorist Front Chairman M.S. Bitta on Wednesday urged President A P J Abdul Kalam to reject the mercy plea of Mohammed Afzal Guru, who has been sentenced to death in the Parliament attack case.

HuJi’s threat to Indian Govt : HuJI in an e-mail sent to a media house claimed that the blast was carried out in retaliation to Parliament attack convict Afzal Guru’s death sentence.

“We owe the responsibility of todays blasts at high court delhi…our demand is that Afzal Guru’s death sentence should be repealed immediately else we would target major high courts & THE SUPREME COURT OF INDIA,“ the e-mail read.