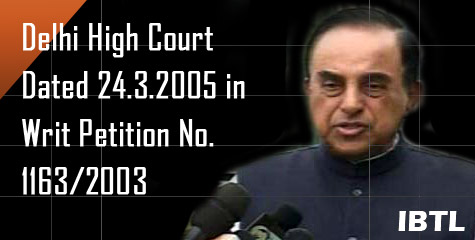 I demand that the Prime Minister immediately call for the resignation of the Union Home Minister Mr. P. Chidambaram for his gross and reckless disregard of the Code of Conduct for Ministers regarding conflict of interest. Not only the FIR was not worthy of the attention of the Home Minister, because it was based on a private complaint by a private party against another private party, and hence not filed by any agency of the Government; but also that Mr. Chidambaram had been an Counsel for one of the parties, namely Mr. S.P. Gupta. The Supreme Court bench consisting of Justice B.P. Singh and Justice Altamash Kabir in its judgment dated 3.7.2006 had held that “In our view, investigation (based on the FIR) cannot be quashed” thereby upholding the judgment and order of the Delhi High Court dated 24.3.2005 in Writ Petition No. 1163/2003. Thus, for the Home Minister to intervene for his former client makes Mr. Chidambaram guilty of gross misconduct attracting Section 13(1)(d)(ii) and (iii) of the Prevention of Corruption Act. He is also guilty of having committed contempt of the Supreme Court by ordering the withdrawal of the FIR registered against Mr. Gupta.