How can Sonia be Chief Guest on Convocation, feel AIIMS doctors 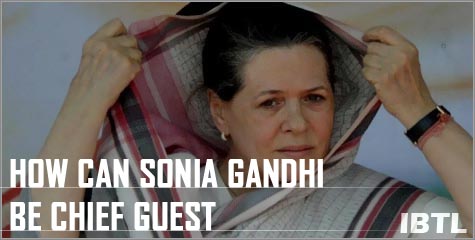 The administration of the All India Institute of Medical Scienes, AIIMS, has invited Sonia Gandhi to award degrees to students at its 39th Convocation. But neither the doctors, nor the students are pleased with this decision and they call it political stunt.

Since its inception, Union Health Minister has been the Chief Guest at the convocation, who's also the President of the institute. In the case of his absence, Prime Minister or the President or Vice-President of India is invited.

A senior AIIMS doctor said that Sonia is neither an academician nor does she hold any relevant constitutional post, and she's got nothing to do with AIIMS, and it's a stunt to please her. But AIIMS spokerperson Dr. Y K Gupta claimed that by virtue of  being the Chairperson of National Advisory Council, they've invited her.

The RDA, Resident Doctors Association had also raised this issue. Former Union Health Minister Shatrughan Sinha also questioned the move saying this would dent AIIMS' image. He categorically stated that political interventions must not take place as they take away the sheen from AIIMS' reputation.