If Anna's of RSS, shall Rahul Gandhi be deemed a criminal 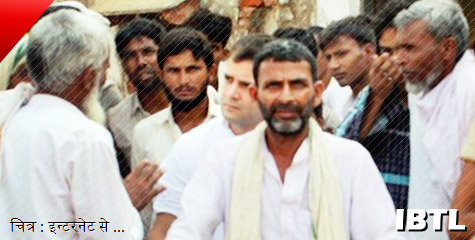 The group of people which lacks an answer to RSS ideology and perceives RSS with its own skewed benchmark, is now trying to prove Anna's RSS connection with a funny and bizarre argument. They've come out with a photograph of Anna with Late Nanaji Deshmukh, a reverred RSS ideologue. Now, if we're to believe that a picture of two people together means same ideology for them, then this photograph of Rahul Gandhi [Reported by Star News] would surely make him a criminal. Even Manmohan Singh, Sonia Gandhi and so many congressmen have photographs with now infamous for his senile sexual adventures, N D Tiwary, so what about them? Is it fine to project that because they are in the photograph with N D Tiwary, they too misuse their power and influence the way Tiwary did?

Rajiv Gandhi and Sonia Gandhi's photograph with Quatrochi is not a ruled out possibility. In fact, a Congress MLA's 139 CDs are available with Bhanwari Devi, then shall we declare the motive of all Congress-led movements based on that CD? Even Jawaharlal Nehru's photographs are available with Lady Mountbaton, some of them, quite playful in mood, so what about them?

Crossing all limits of political dignity and coming out with allegations using such language makes the leaders' (Manish Tiwary, Beni Prasad Verma) conduct deplorable. Those who allege that Anna is intruding into their exclusive right of framing the law, conveniently forget that they've brought constitutional amendments just to suit their selfish interests, at several occasions in the past. The amount of effort Congress is putting in killing this movement, has it put even half this effort in any move with national interest?

Those who raise questions on Anna's photo with Nanaji Deshmukh, will they put the same accusation on Mulayam Singh and Digvijay Singh too?

- Kishor Badthawal (The author is a commentator on issues of national interests. The views expressed are his personal views.)