Inside the house: the Lokpal battle 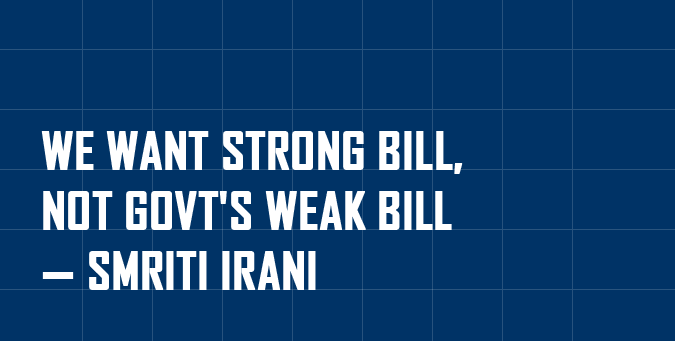 "If the majority of the house was ready to work for next 24 hours then the Rajya Sabha should have done it" - Smriti Irani, Member of Parliament

The BJP and the government continued to spar over the Lokpal Bill as the Rajya Sabha witnessed some sharp exchanges between Leader of the Opposition Arun Jaitley and Congress MP Abhishek Manu Singhvi today. It is reported by news agency.

It is the sense of the House that Anna Hazare has repeatedly referred to when accusing the government of betrayal over the Lokpal Bil. BJP MP Mr Jaitley went a step further when he urged the House to heed the "sense of the nation". Setting the tone for the debate that was to follow, Mr Jaitley said, "There is a sense of this nation, that both the Houses of Parliament enact a strong Lokpal law."

"We are being tested. Can we rise to the occasion?" he asked and referred to the perception among the people that those in the government and those in politics did not want a strong law against corruption.

Congress MP Abhishek Manu Singhvi, who heads the Parliamentary panel which drafted the legislation before it was reworked by the government and introduced in Parliament, countered by exhorting the BJP to pass the Lokpal Bill for the "nation's sake". Accusing the BJP of coming up with excuses not to clear the legislation, he declared that it was "in search of the elusive perfect to deny the good".

"Who wants a weak law, and who wants a strong one will be judged by the public. And it will not forgive whoever lets it down," Mr Jaitley had earlier declared. "Let us not leave a bad history for the future," he said.

As the government grappled with key ally Trinamool Congress' demand for an amendment over the Lokayukta issue, Mr Jaitley added, "It is a test for the government's allies as well. Are they only willing to proclaim or are they willing to strike as well?" he said.

Mr Jaitley based the BJP's opposition to the Bill on the influence the government would have in selecting and removing a Lokpal; the failure to make the Central Bureau of Investigation (CBI) an independent agency; the portion on the Lokayukta or anti-corruption watchdog to be established in all states which he said created a "grey area" and the bill not adhering to the sense of the House on bringing the Citizen's Charter and Group C and D employees under the Lokpal.

Mr Jaitley did not let go of the opportunity to take on the Prime Minister either. "There is no contradiction between the fight against corruption and retaining the federal structure," he said.

But Mr Singhvi came up with a spirited defence of the bill and said that the BJP wanted to create a "behemoth of unimaginable proportions" by bringing the CBI, CVC and the Citizen's Charter within the Lokpal's ambit.

He was also critical of the demand that the Lokpal have suo moto powers and control over preliminary inquiry, actual investigation as well as prosecution. "Thank God you did not say judgement must also come from Lokpal," he said.

On the opposition to the provision on the Lokayukta or the anti-corruption agency in the states, he said that the government had already amended the law to say this clause would apply only with the consent of the states. Referring to the composition of the nine-member Lokpal, Mr Singhvi said that the bill did not ask for reservation but merely sought "representation" to the OBCs, SCs, STs, women and minorities.

Taking a dig at Mr Jaitley, he said, "Your Constitutional cocktail doesn't have the punch it should have". He also accused the BJP of not voting to grant constitutional status to the Lokpal only because the suggestion had come from Rahul Gandhi.

"It will take you 30 seconds to pass this bill with minor technical changes. Or the cat will be out of the bag and it is unseemly cat," Mr Singhvi said.