Black ink thrown at Baba Ramdev, a close aide claimed that Siddiqui had a bottle of acid 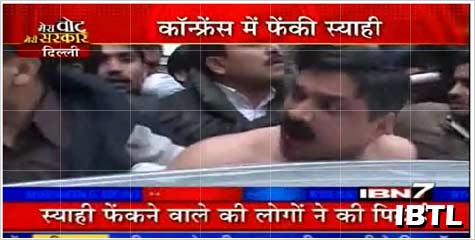 Baba Ramdev was today the target of an attack by a man who threw black ink on his face at a press conference he was addressing on his plans to campaign against black money in the coming assembly elections.

Seated along with Janata Party leader Subramanian Swamy at the Constitution Club in the heart of the capital, Ramdev’s right RPT right eye was blackened with ink by the man identified as Kamran Siddiqui, a resident of Delhi who is said to be running an NGO ‘Real Cause’ which is a petitioner in the Batla House
encounter case.

Jaideep, Ramdev’s close aide, claimed that Siddiqui had gained entry into the hall carrying a walkie talkie apparently posing as a security personnel. He also claimed that a bottle of acid was recovered from Siddiqui.

Ramdev, who immediately wound up the press conference, later said he was not deterred by such attacks and would continue his campaign with full force against corruption.

"We talked about black money, we talked about eradicating corruption and in return as a prize this is what I have got. However, by throwing ink on someone, one cannot malign his character," he said.