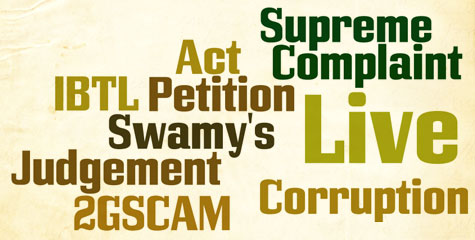 Warrior against corruption Dr. Subramanian Swamy, who is a bigger problem for the UPA government than the entire opposition and all other problems combined, earned another major success today. The Supreme Court accepted his petition against the Prime Minister's Office in the 2G case, saying that all public authorities should give a sanction within 3 months against any public official if a request is made for prosecution. The Court said that Dr. Swamy had the locus to seek sanction from the PM for the prosecution of A Raja in the 2G scam and that sanction for the prosecution of a public servant has to be granted within a time frame.

Justice A K Ganguly ruled that the sanction would be deemed to be granted if competent authority failed to take a decision within four months. The Supreme Court set aside Delhi High Court judgement refusing to direct the Prime Minister to take decision on granting of sanction against Raja and upheld the constitutional right of a citizen to file a complaint against a public servant under Prevention of Corruption Act. The SC left it for Parliament to frame guidelines for giving sanction to prosecute officials.

Dr. Swamy had moved the Supreme court in 2010 alleging a delay by the PMO to give him sanction to file a case against former telecom minister A Raja, who is accused of being involved in 2G scam. Swamy had written to the PMO on November 29, 2008 but it was only on March 19, 2010, that the PMO replied that the plea was "premature" as investigation was being carried out by CBI. Raja was arrested by the CBI in the case and is presently lodged in Delhi's Tihar Jail.

Happy with the decision, Dr. Subramanian Swamy said, "Sanction was a big hurdle. Getting sanctions used to take a long time. The PMO took 16 months to clear sanction in A Raja's case." He told that the SC has said that sanction should be given in 3 months time. If consultations have to be made, it has to be done in 3 months time and additional of 1 month. Dr. Swamy exuded confidence that now it's possible to win war against corruption.